It has been three weeks since the last show of this competition season.  The last show was on Saturday, October 15th, and I was back into teacher mode on Monday morning.

Another HUGE life change is in the works, so I’ve taken time to reflect before I wrote this post.  I also wanted to wait until I got the “official” show photographer’s pictures so I could do comparisons from stage to stage.

Your sponsorship for this last show made it possible!!   As you read through this, you’ve got to know it was the most amazing experience I’ve had in bodybuilding to date.  I believe that it was blessed from the start because of your generosity.

THANK YOU!! Alberto Nunez, The Patient

You are a Scary-Smart Program Writer and Peak-Week-Whisperer.  We did good.  I’m excited for 2019.

“So how did you do?” is the logical question, right?  And then I see the look of disappointment in their eyes when I tell them my placing -third out of 3 in Class B, my string of last place finishes in my class continues, but this was my best presentation to date and it is ok because that’s a fair placing. And then a look of dubious agreement as I explained that this sport is about personal progression, yada, yada, yada…

Honestly, it’s better than OK.  Something finally clicked after the July show when I got last place for bodybuilding in a line created by the promoter with me and three figure pros.

I spent two years mustering the courage to get back on that stage to be judged even after I was told I would never be competitive.  2017 was all about proving to myself that I’m capable of standing back up and taking hits.  Period.  It’s not about bodybuilding or how I look – it’s bigger than that.

Hindsight is 20/20, right?  My physical transformation was a side effect of the real work I’ve been doing.  I’ve used bodybuilding – the training, the disciplined nutrition, the stage experiences – to slowly learn to face fears that crippled me before.

The mental game I needed to change myself physically has built a growth mindset about everything else, too.  2015 knocked me on my ass and gave my inner self-doubt plenty of material to use against me.

But now I know 2015 wasn’t supposed to be a disappointment – it was the next lesson.  Had that not happened, I would not have done the research, the crying, the soul-searching I needed to break through some old-thinking to become a better teacher, to be a more supportive and encouraging wife, and do to get ready for the next big, scary life change I’ll tell you about at the end of this post.

Every time we face a fear and act anyway, we get stronger.

What you see here is only the physical transformation.  Too many people get too hung-up on this part.  What  you can’t see is the most important part.  It’s the grit.  I thought I had grit before – I had no idea.  No.  Idea. 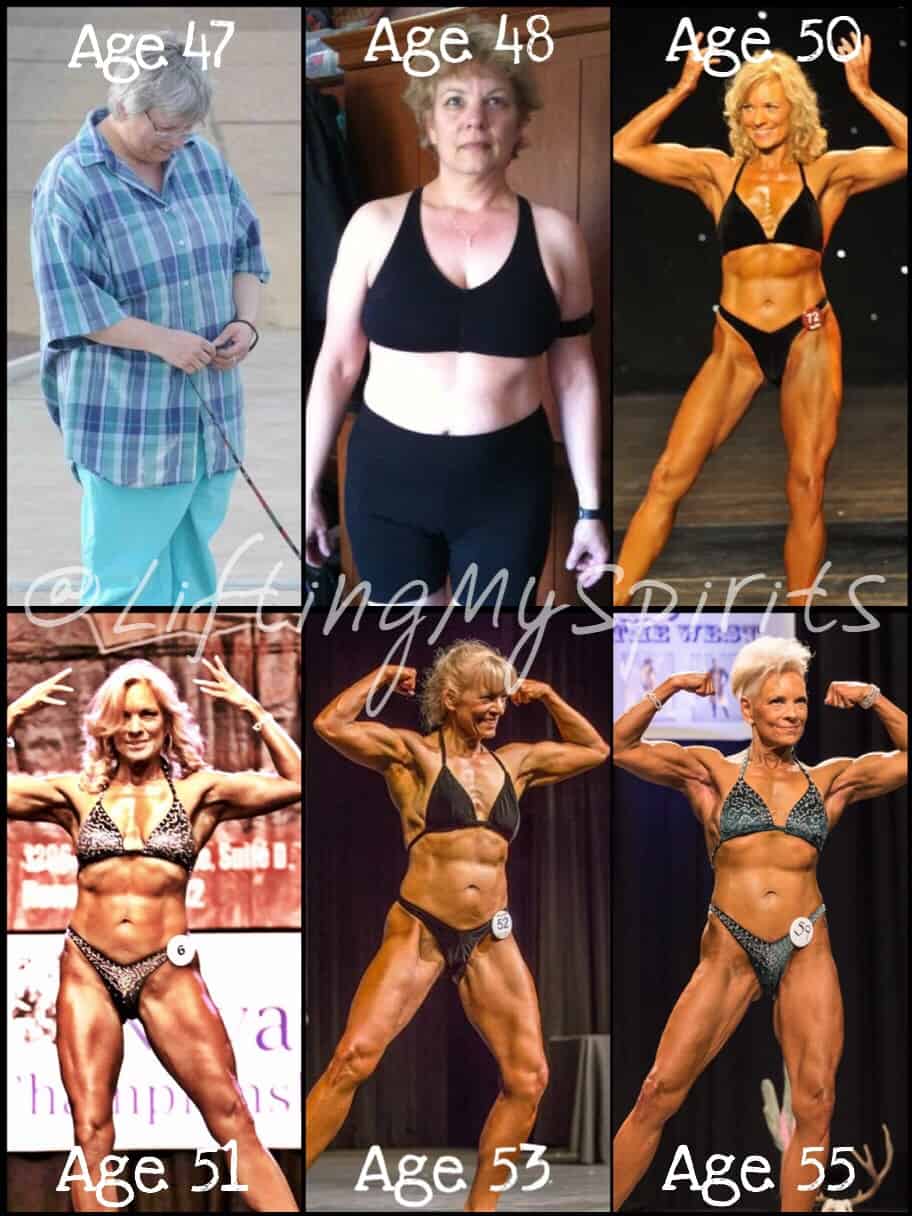 As I write this, I’m thinking about a young woman walking into the gym, knowing she has to loose hundreds of pounds, feeling that people are going to judge her, but she shows up anyway.  Or the grit it takes to finish those damn burpees!

So I’ve learned that if there is something that needs to be done, something inspired, something big and scary, don’t think.  Just act. Now I have the confidence to know that I can figure out the details as I go.  I CAN make it work.

I went into the July 2017 show in my best physical condition to date, was the only “bodybuilder” who registered for that show with the intention of competing as a bodybuilder, and I still came away with a last place finish.   But that’s just their record keeping.

My personal victory was getting back up there and putting the ribbon and bow on the big “Not-One-Fuck-Is-Given-Present” I needed to deliver to the nay-sayers.  This.  Is.  My.  Sport.  I will continue to get up, dust off, suit-up and show-up.

Anyone who feels compelled to clue me in on why I’ll never be competitive as a bodybuilder, needs to (appropriately) direct those comments to a mirror.  I’d rather keep placing last than quit.

(If it’s negative me talking to real-life me – well, shut up and get in the back seat.  You’re not driving.)

“Never give up on something that you can’t go a day without thinking about.” ~ Winston Churchill

I went into the October 2017 expecting to not place well because I knew I’d be in a line with athletes with more muscle, so the plan was to have as much fun as possible.  That show turned out to be the most enjoyable one to date!  It was an amazing experience!

My friend and teammate, Denise, did this show together, which was a first for me and made it memorable.  Her daughter did my makeup and that made it special, too.

Denise was in Class A and I was in Class B, but when they lined us up, we were next to each other.  We weren’t competing directly, so we just got to go out and have fun!  So awesome!!

I’ve been told by other competitors that it’s the camaraderie that hooks them and what they enjoy most about competing, but it wasn’t until this 5th show when I got to experience that first hand.

I was so tired after this show, I asked Hubby if we could just go home.  I showered off the top layer of tan, made myself a lovely grilled cheese sammich, had an adult-beverage, and hit the hay.  The next morning – our first visit ever to the Cheesecake Factory!!  Oh yeah.  That was pretty damn special.

It’s been a blessed competition season!  My friend Michelle flew out to support me in July and  Denise was next to me on stage in this last show.  And then a fabulous meal with my guy!!  It was a perfect way to end my two-year intense self-reflective period – a total celebration!! 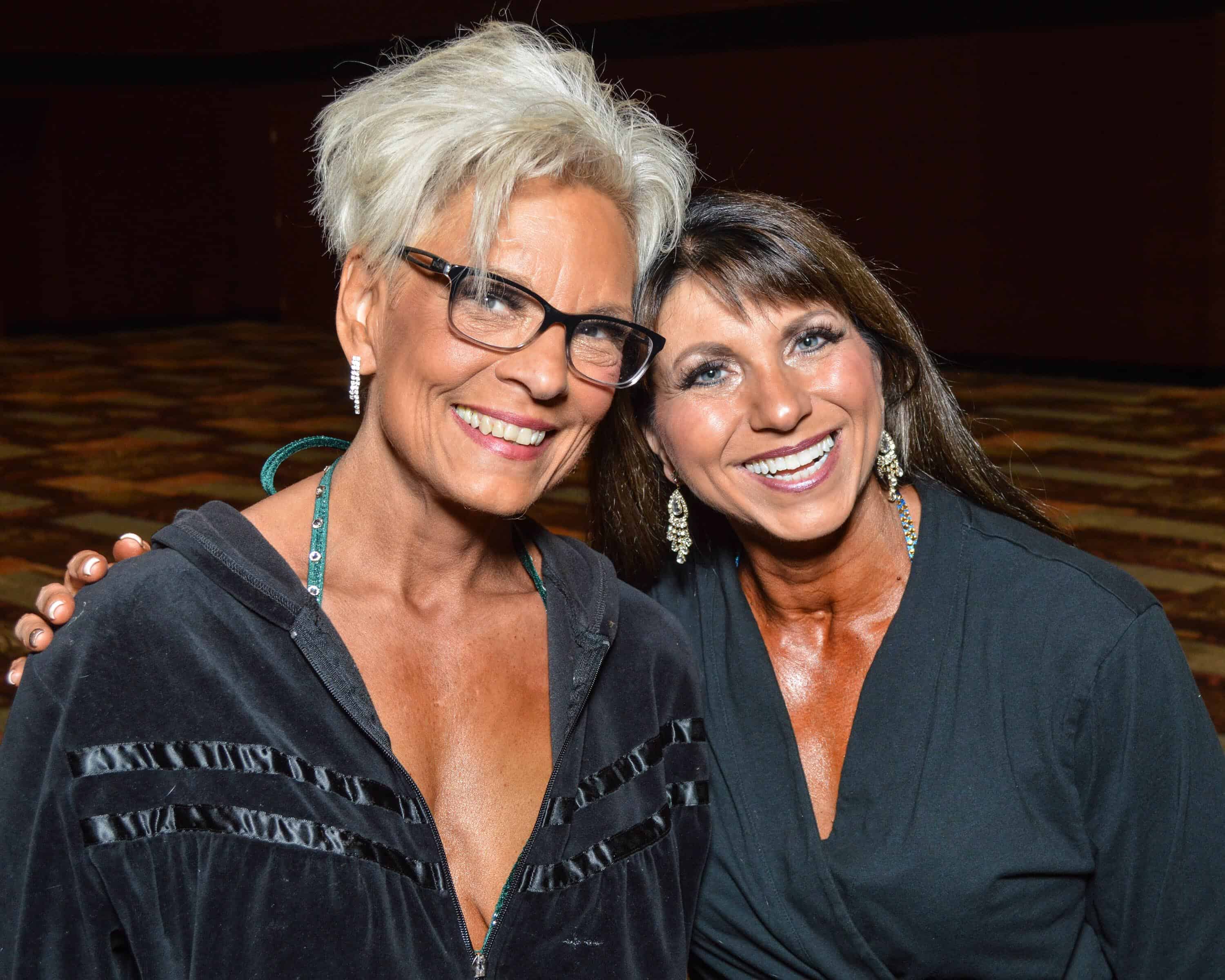 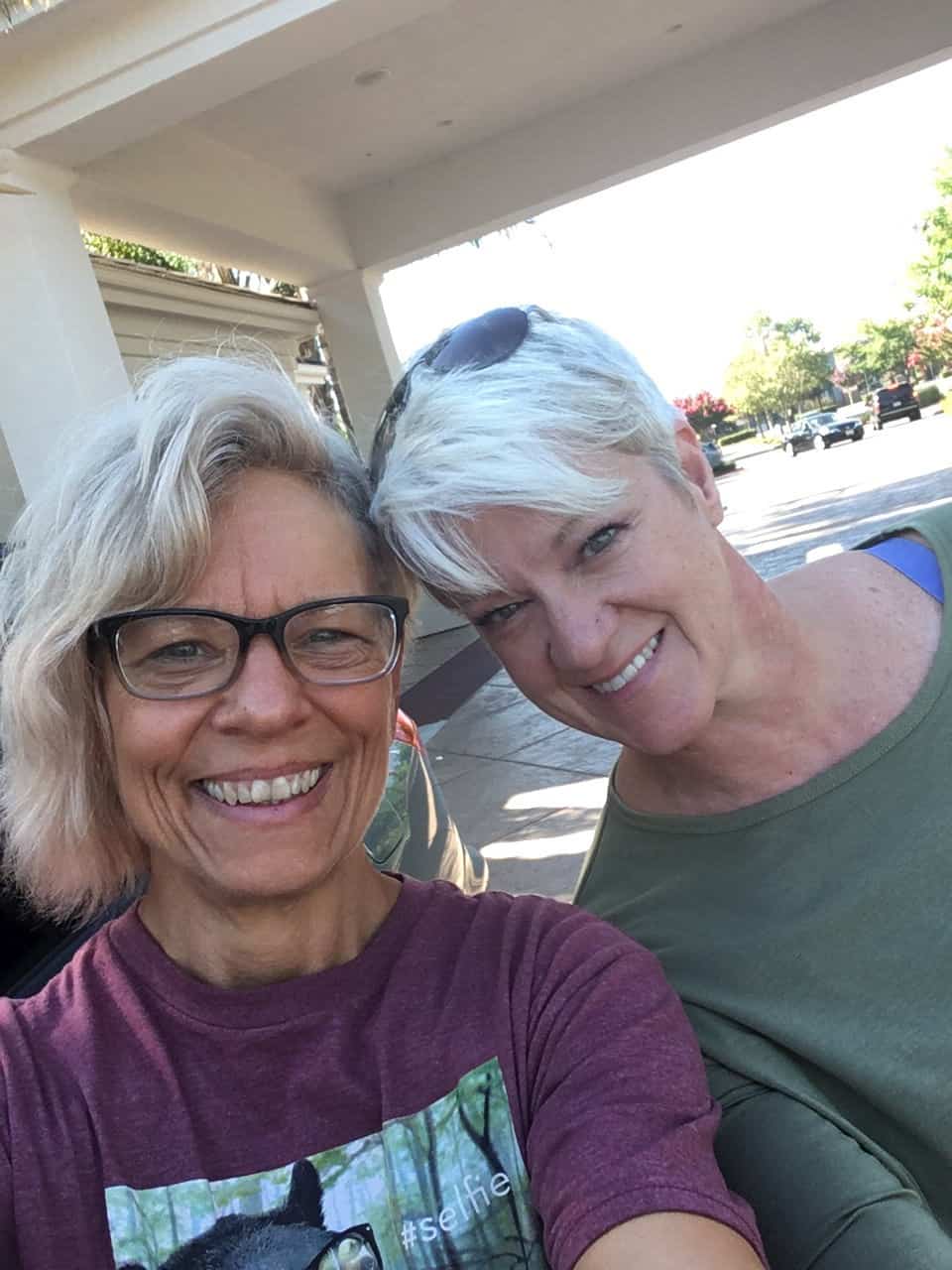 I made a point to meet and get to know the other two women in our division before pre-judging.  We were all friends on Facebook by the time the night show rolled around.  We cheered for each other off stage during our individual routines.  We celebrated back stage afterwards by sharing a bag of caramel M & Ms (Thanks Michelle for introducing THAT awesomeness into my life!  Paying it foward…)

The three women  to my right have inspiring stories about how they got to this place and it was humbling to hear them talk about their challenges and blessings.  So yeah, I had fun, met some amazing women, and I think we will be friends for a long time.  And I placed last.  But this medal was not a generic, plastic trophy.  This one is special.  This is now my favorite last place ever!!! 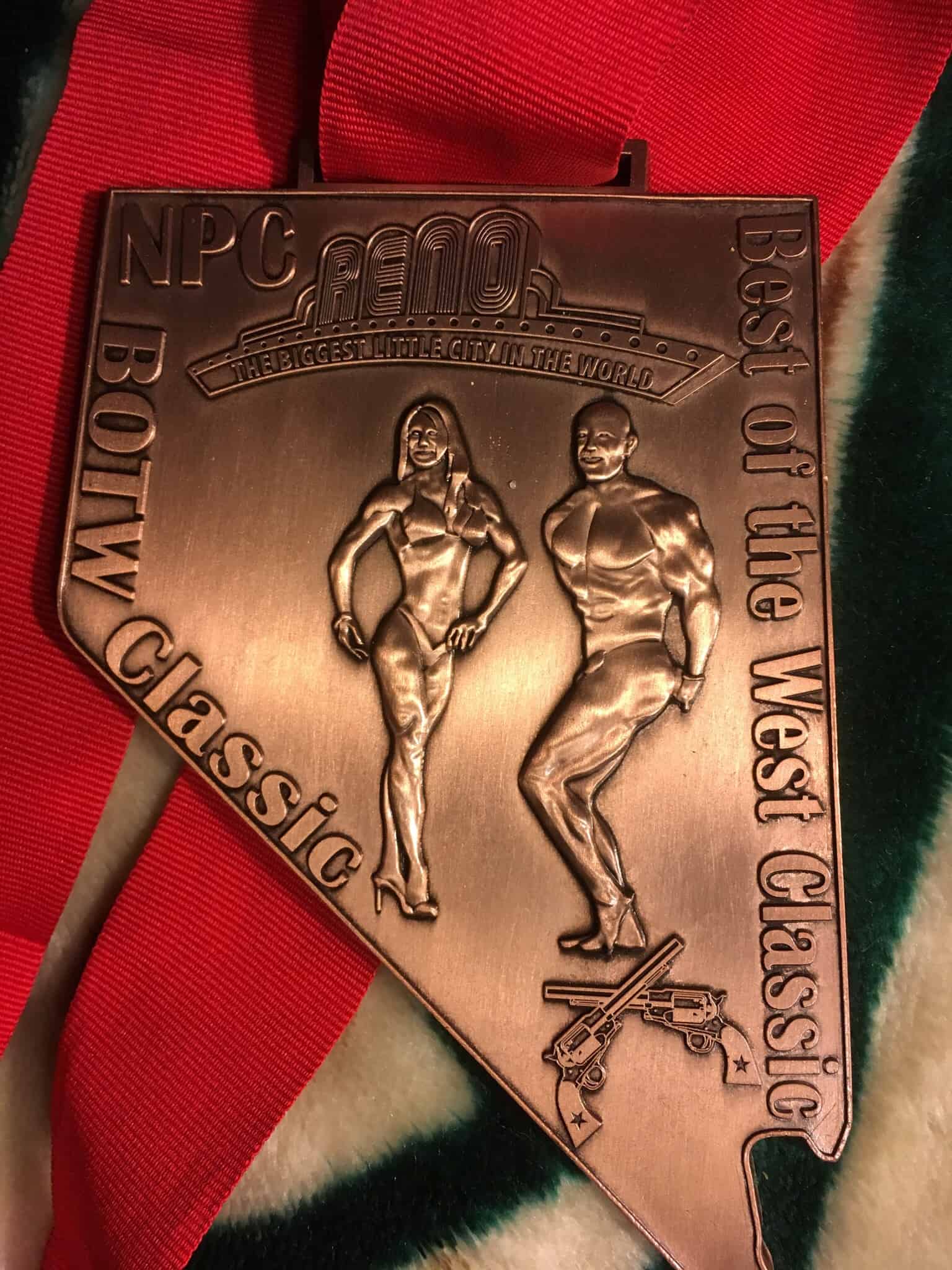 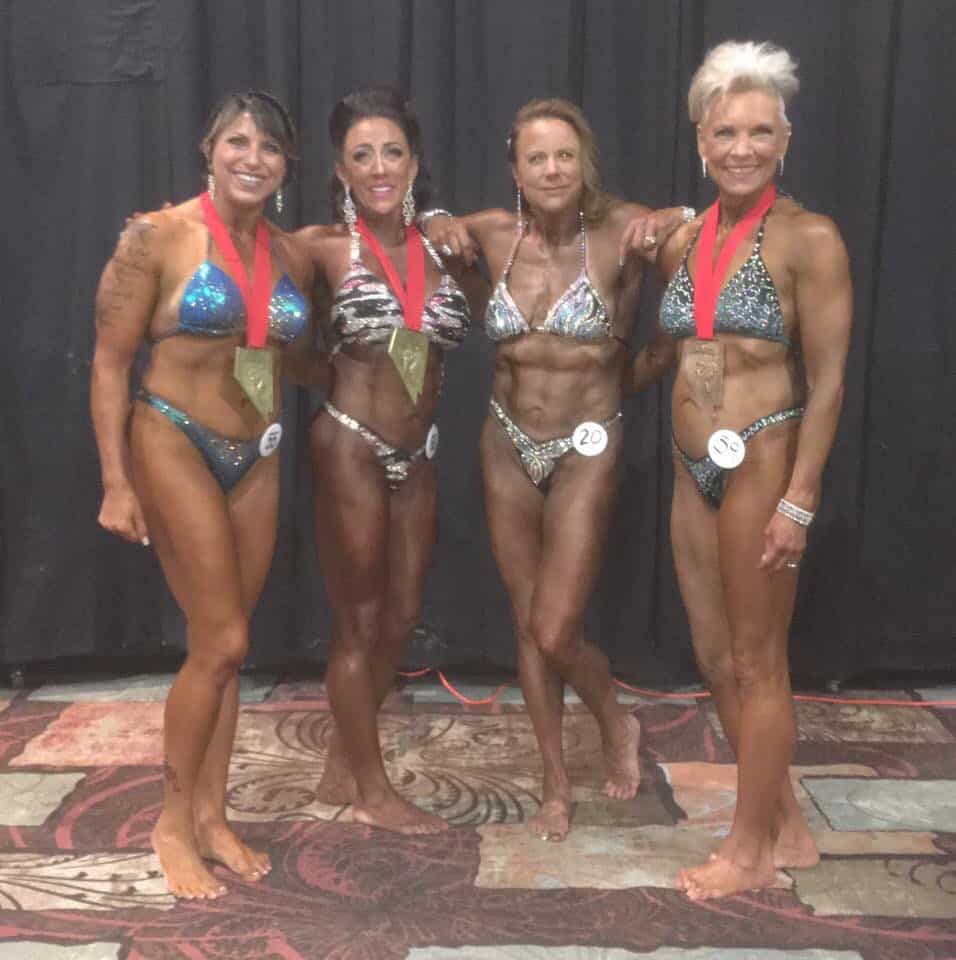 Ok – now the nitty gritty.  I was a couple pounds heavier in the October show than in the July show.  My peak week was different this time, too.  My coach, Alberto Nunez (3DMuscleJourney) doesn’t change things up, but for the October peak, my body wasn’t filling out.  I’d send video each morning and then he would increase my carbs each day – by a lot.  Doubled, usually.  Highest day approached 300 grams.

As a result, we both think I looked sharper in October over July in the videos, but I don’t think I see that in the photos.  The extra scale weight could be accounted for by muscle fullness, which would make the definition appear sharper.

Once I got the pictures, I think the lower body in the back was the only part that truly improved.  Or it could be the difference in the poses between bodybuilding and physique.  I’m going to just drop a bunch of pictures in here and let them speak for themselves. 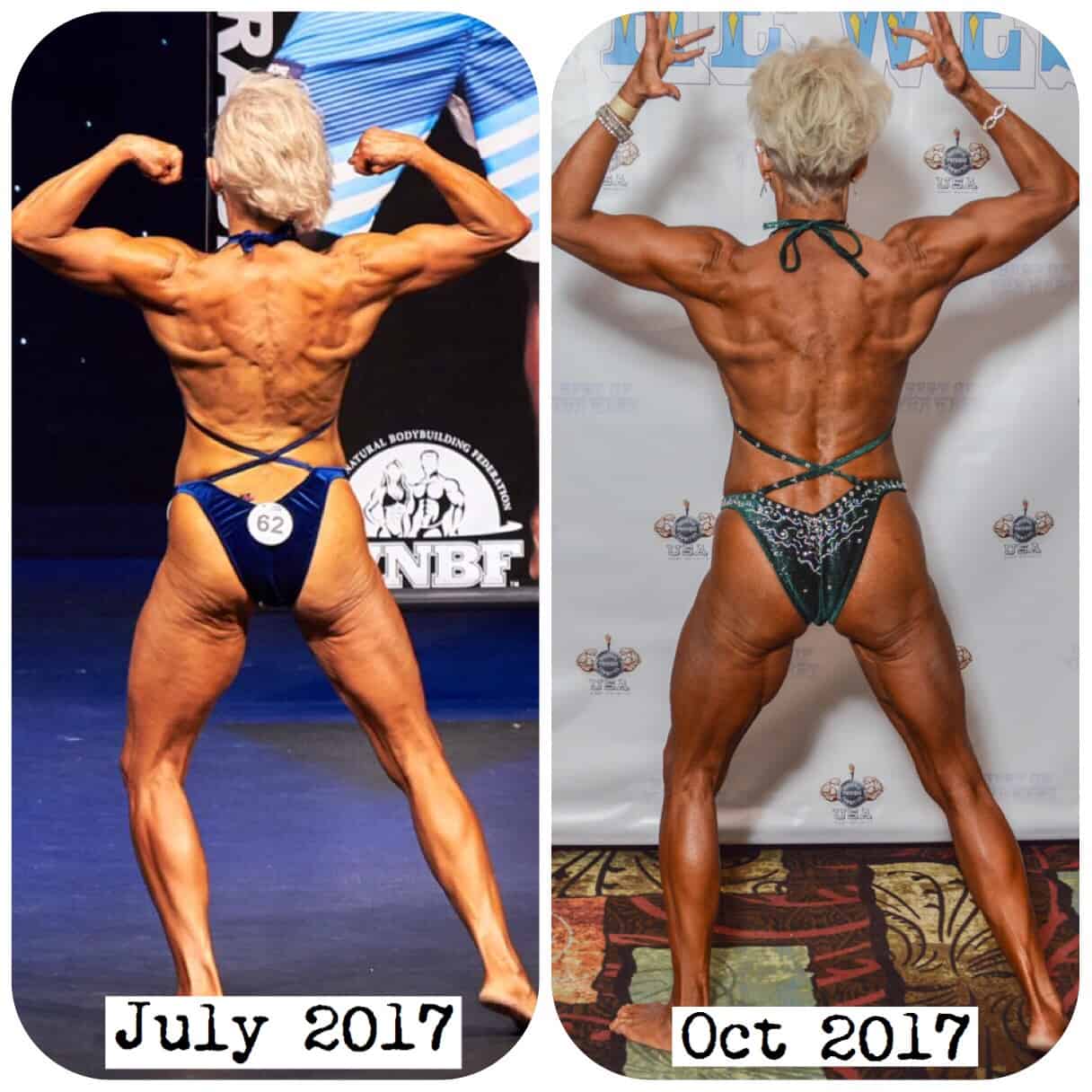 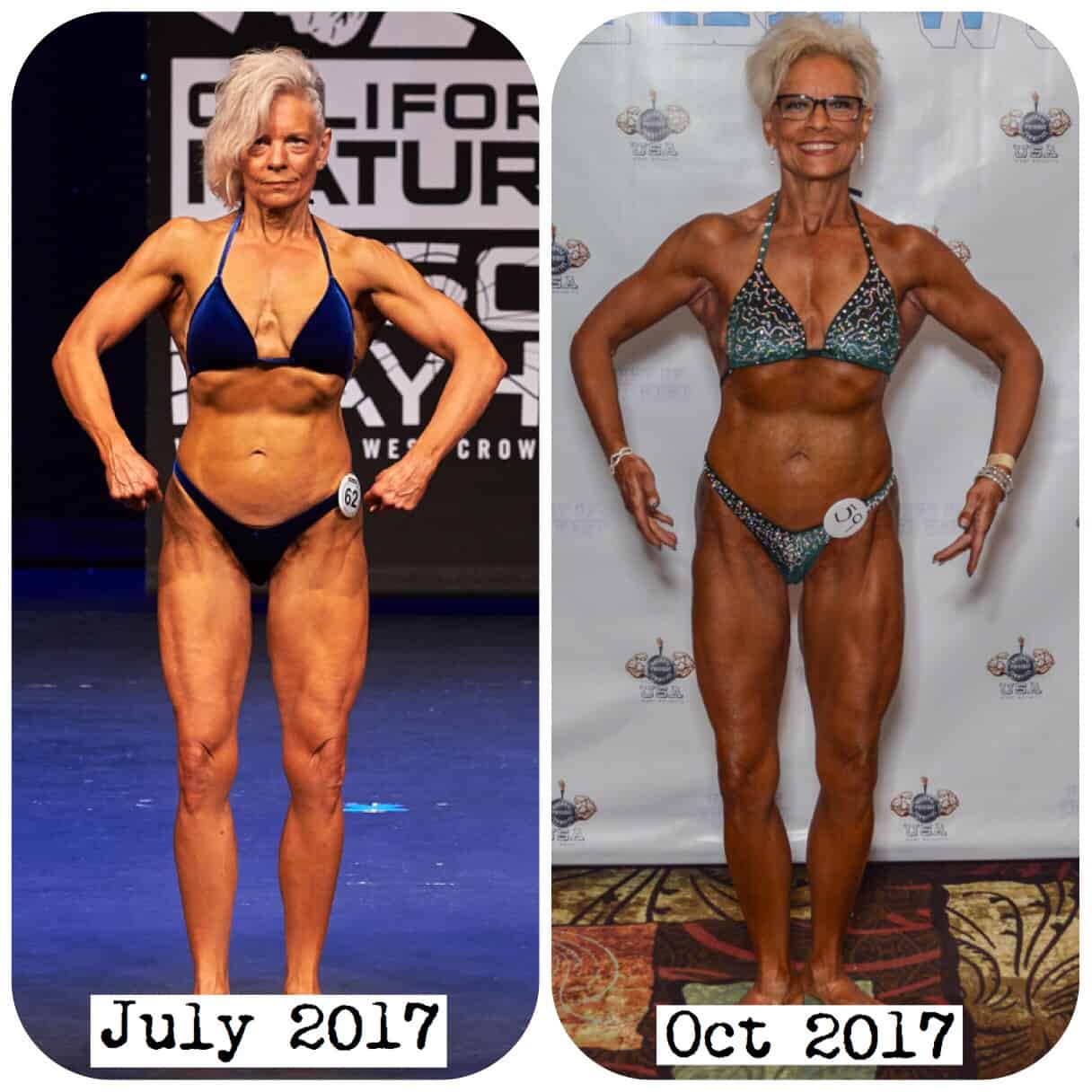 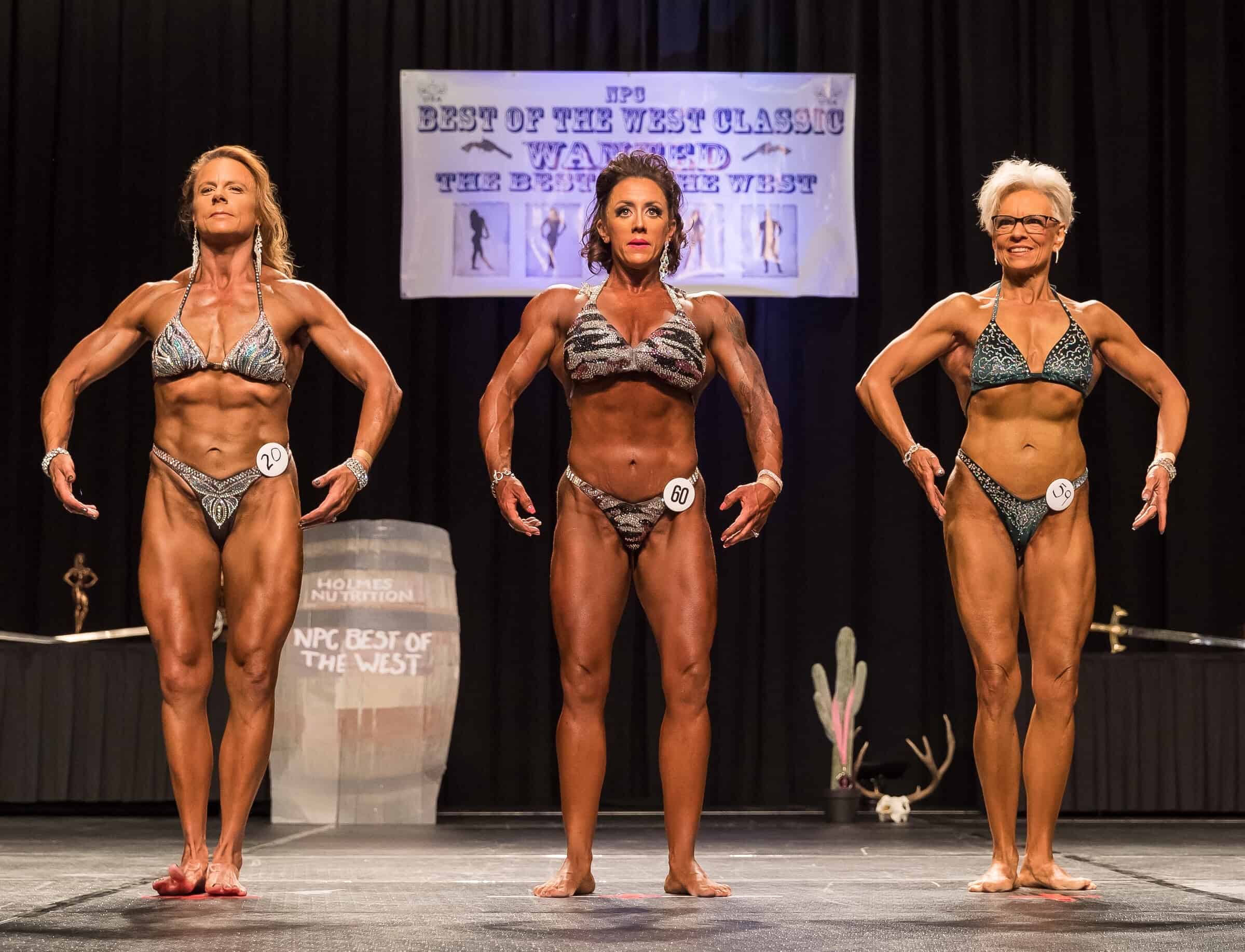 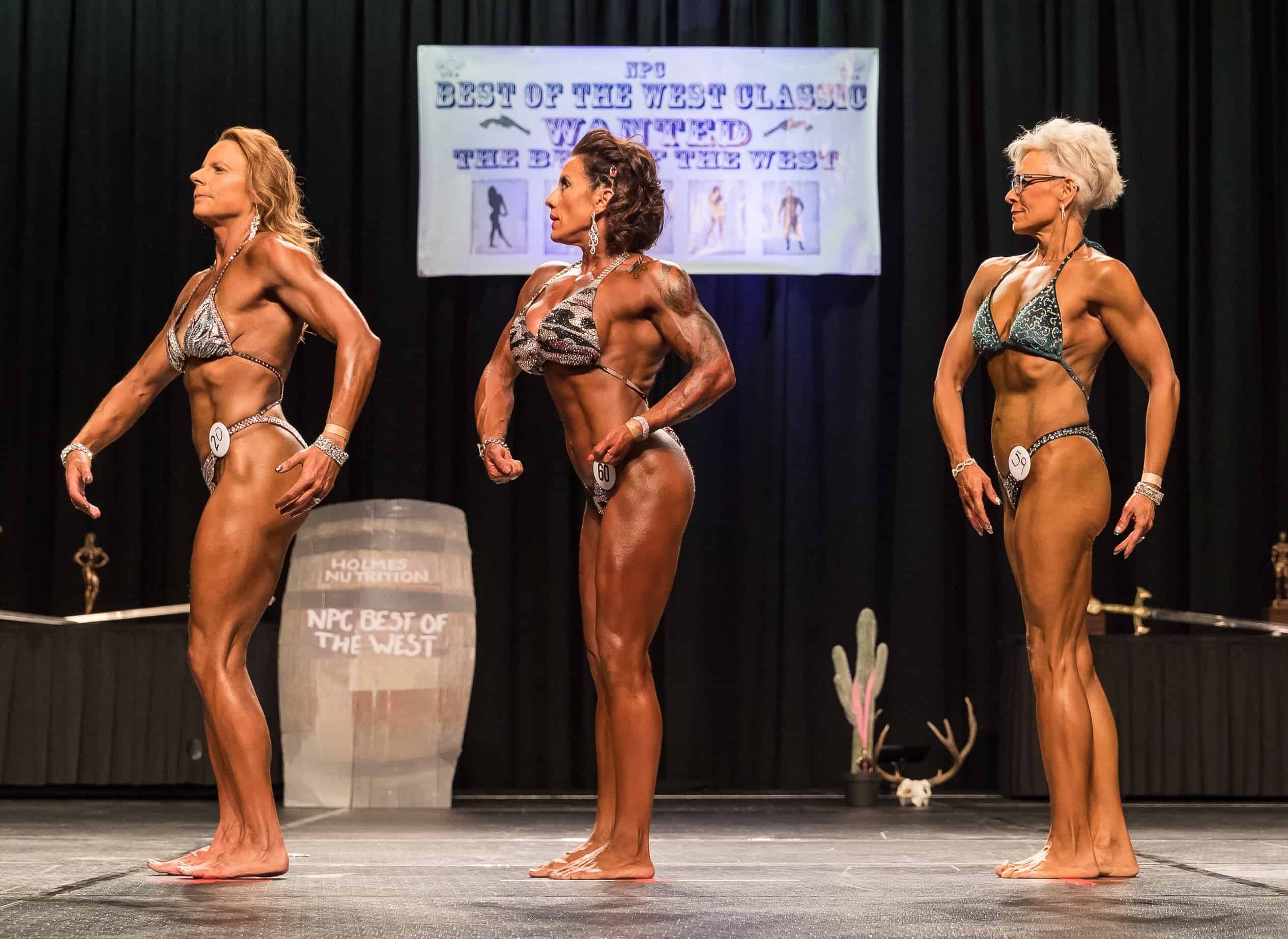 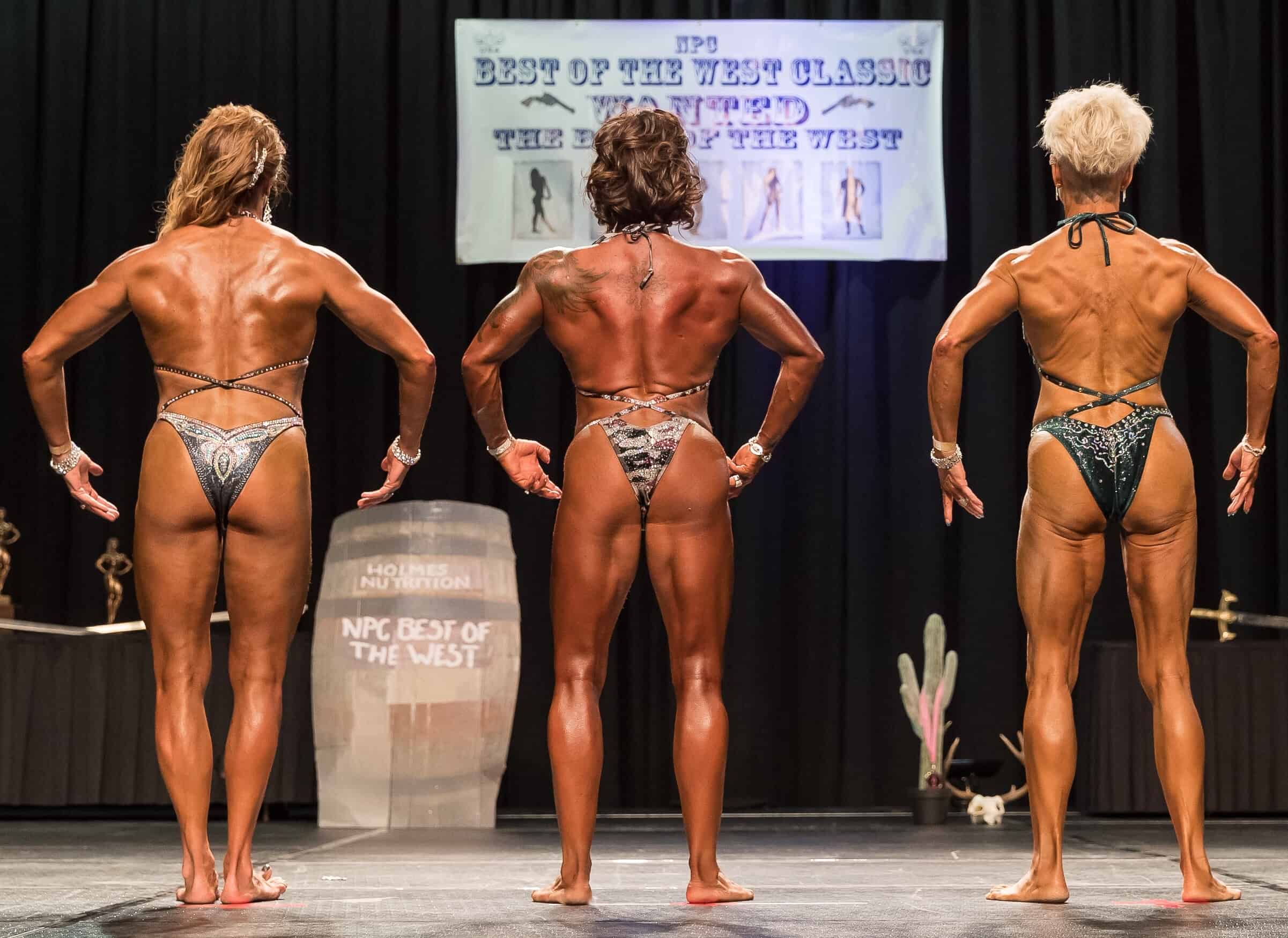 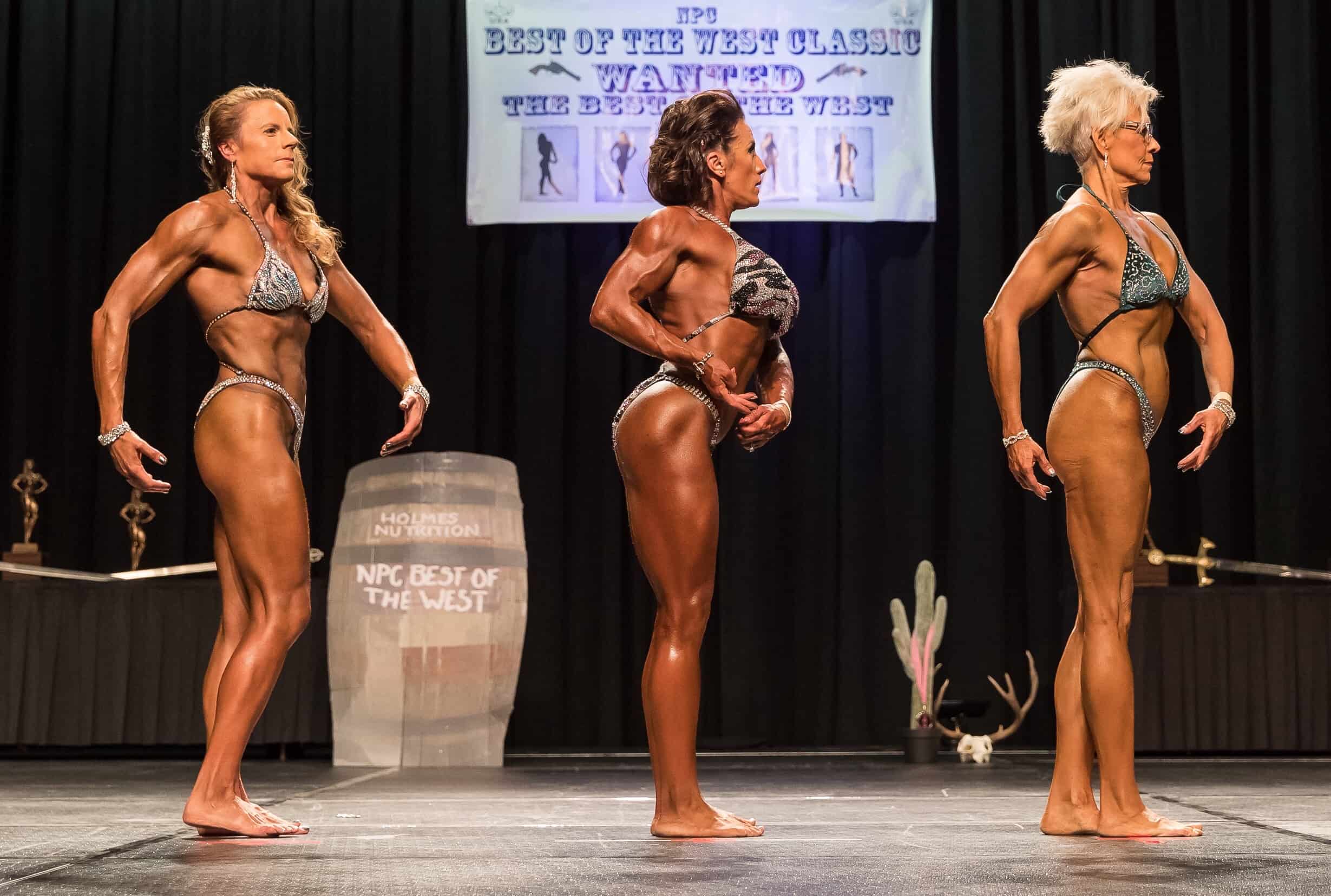 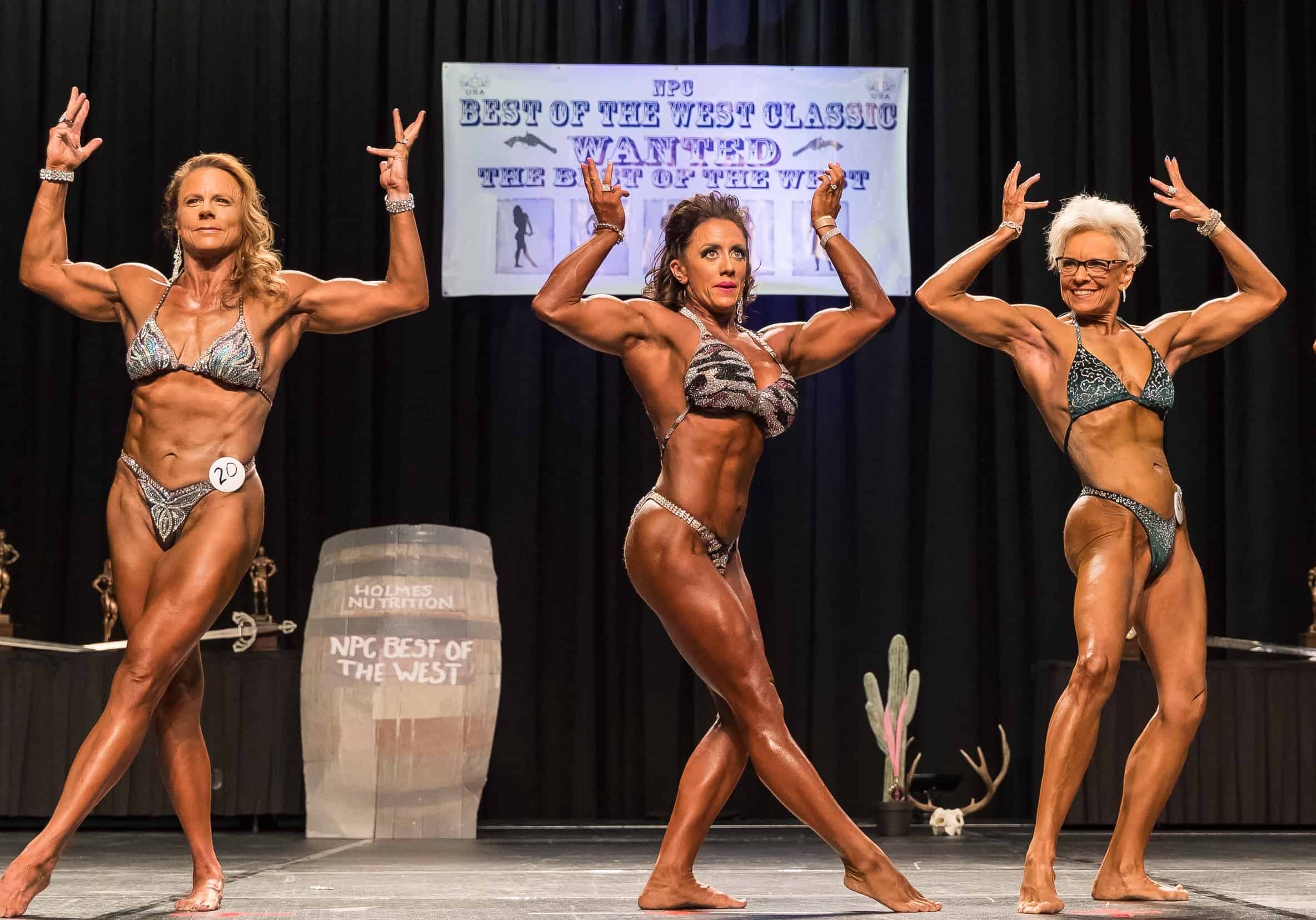 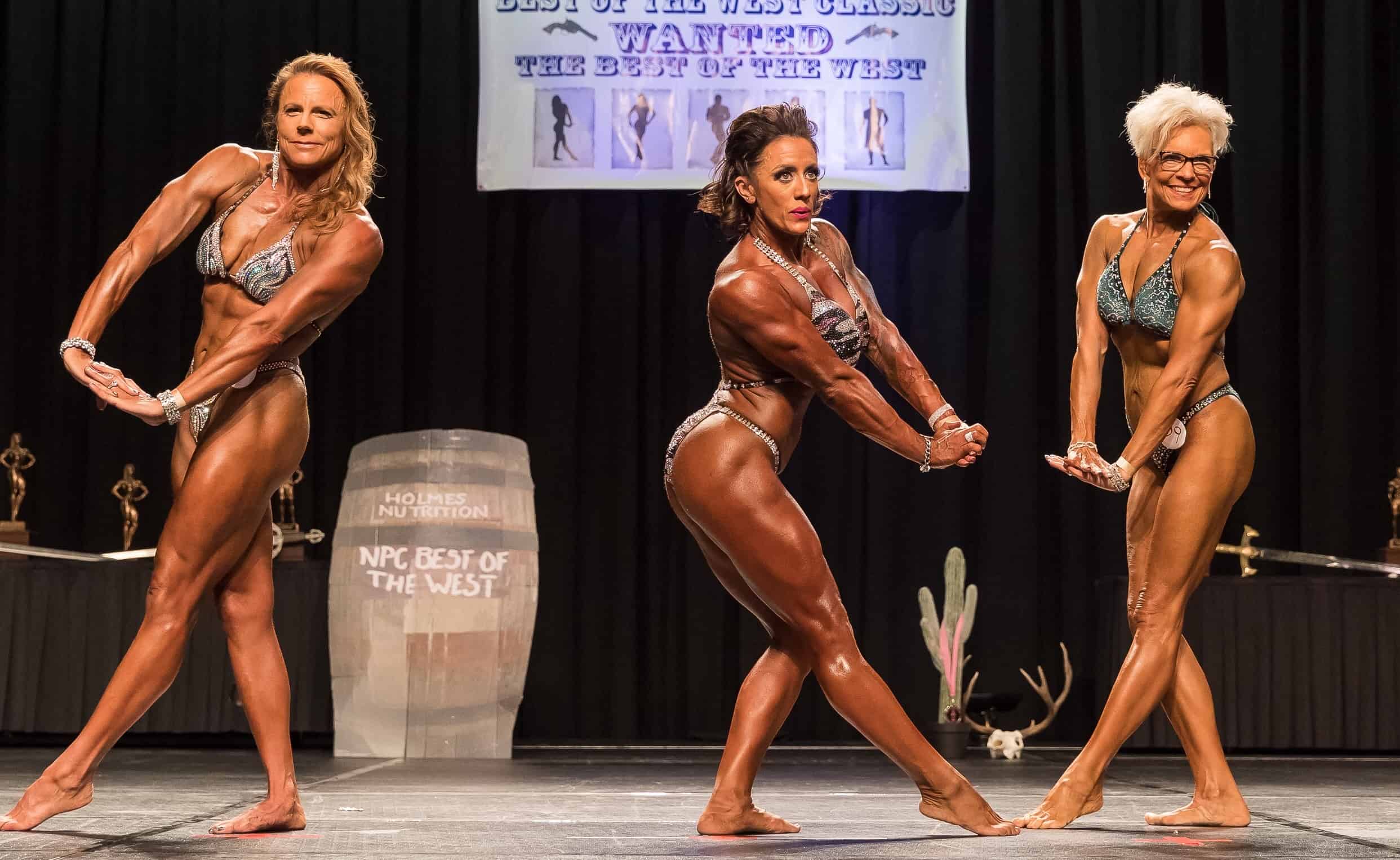 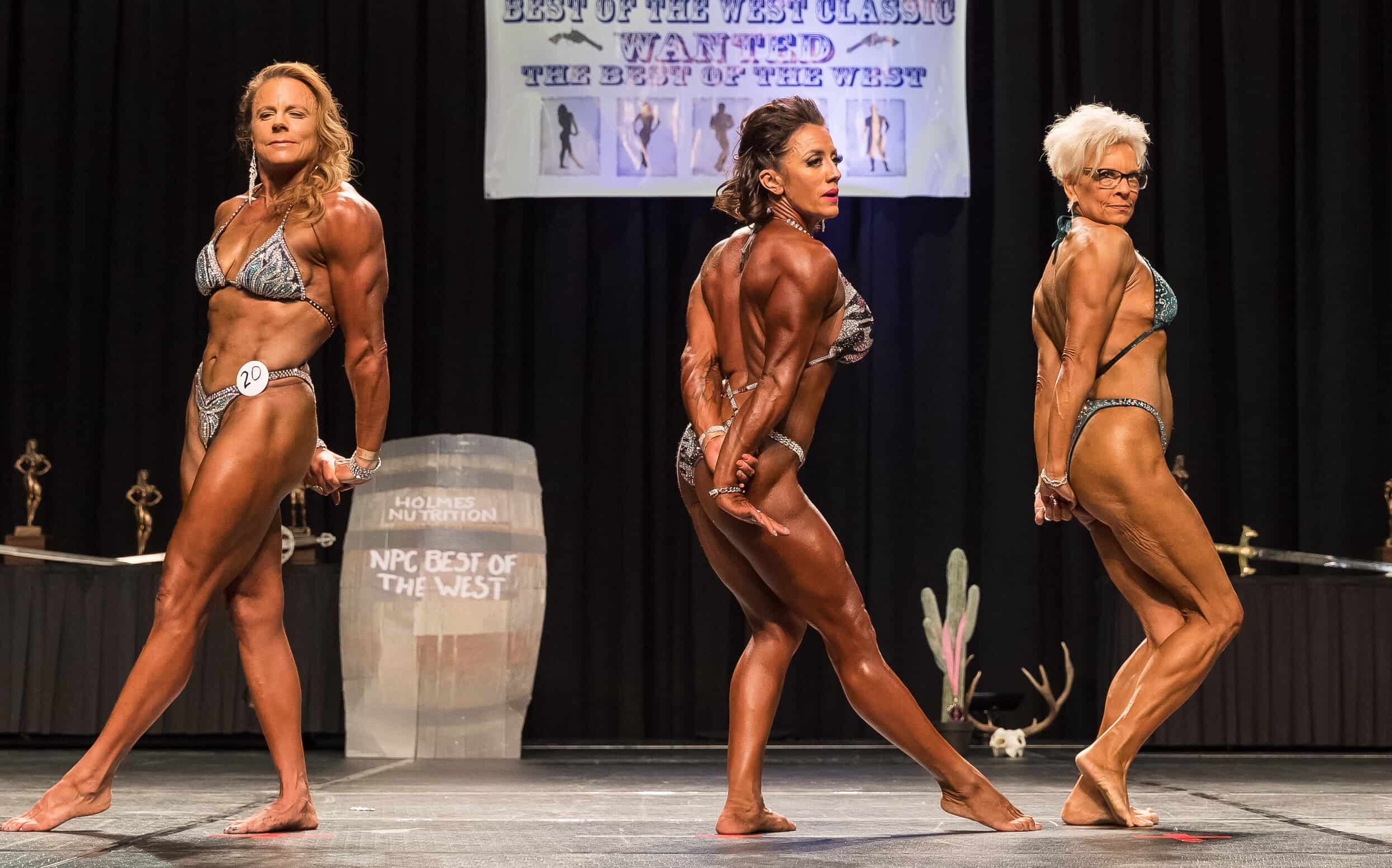 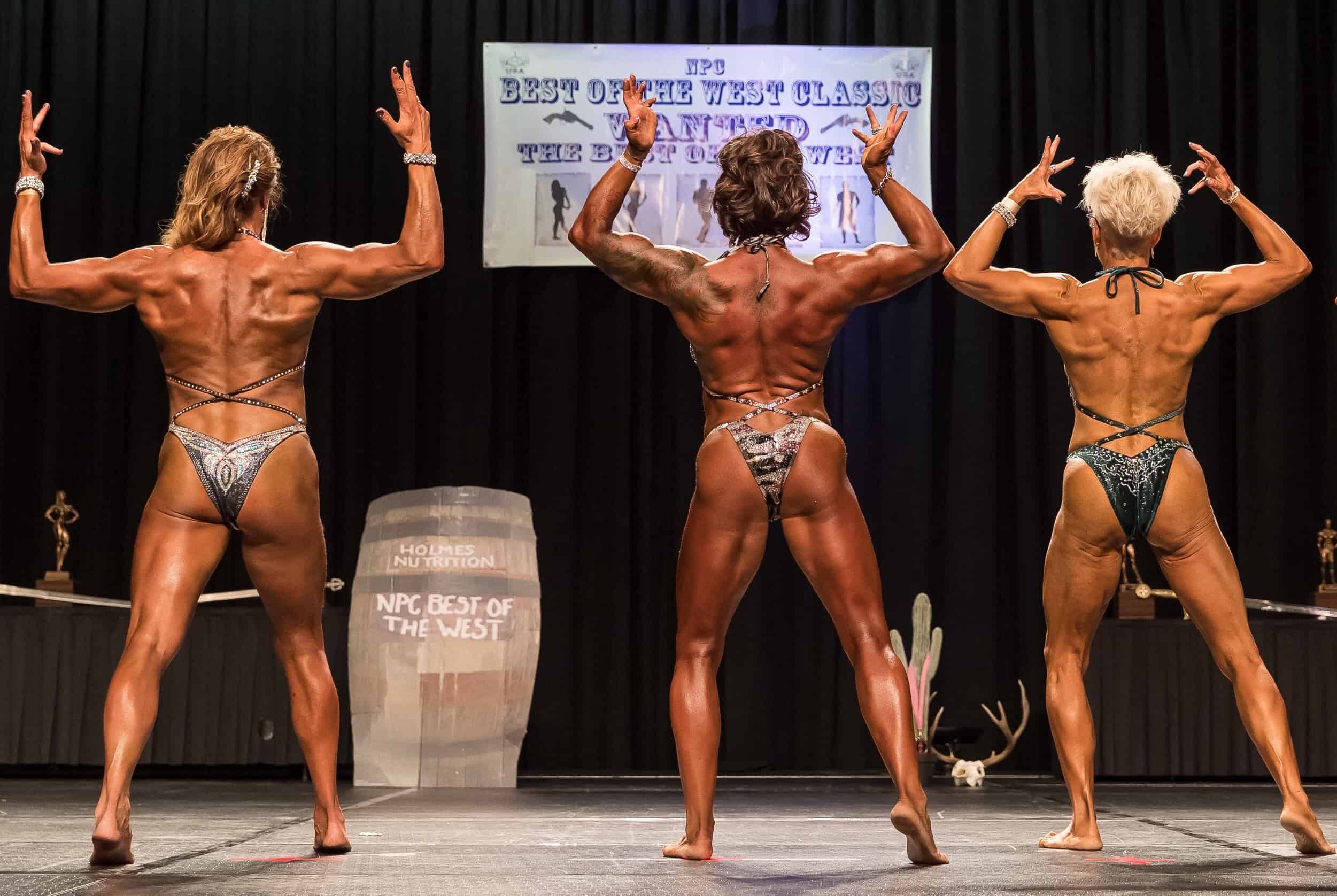 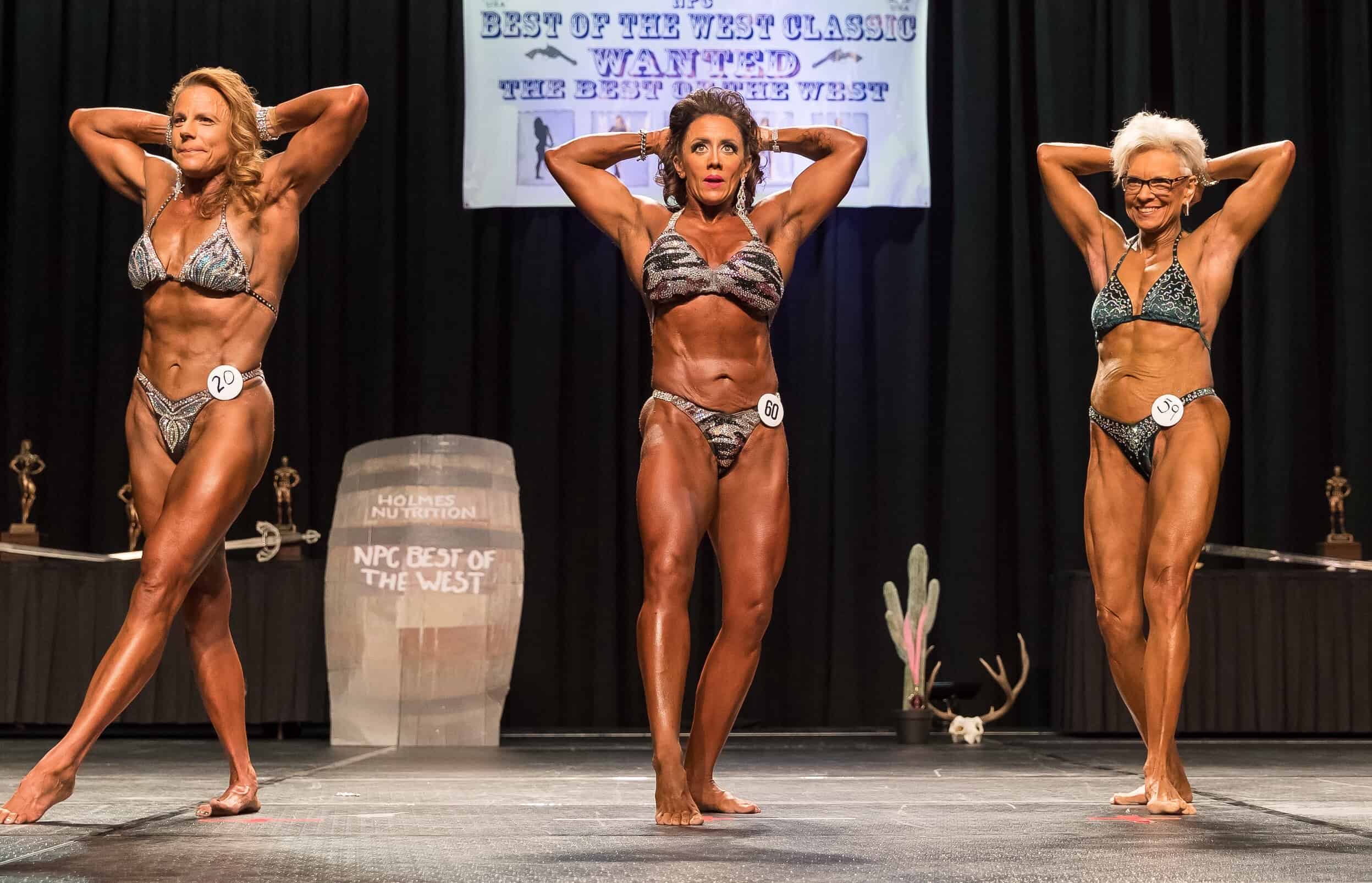 Shots From Routine at Night Show 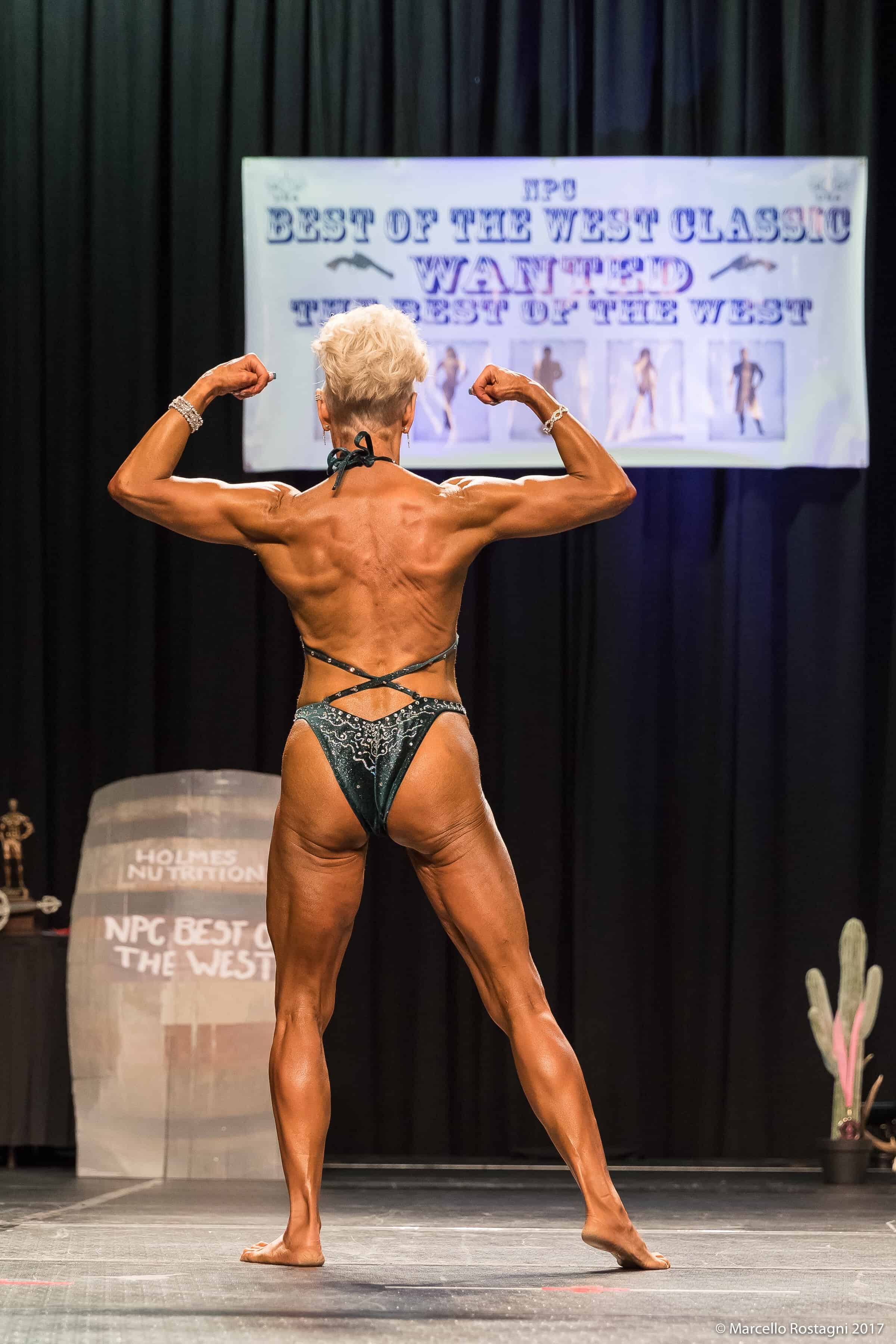 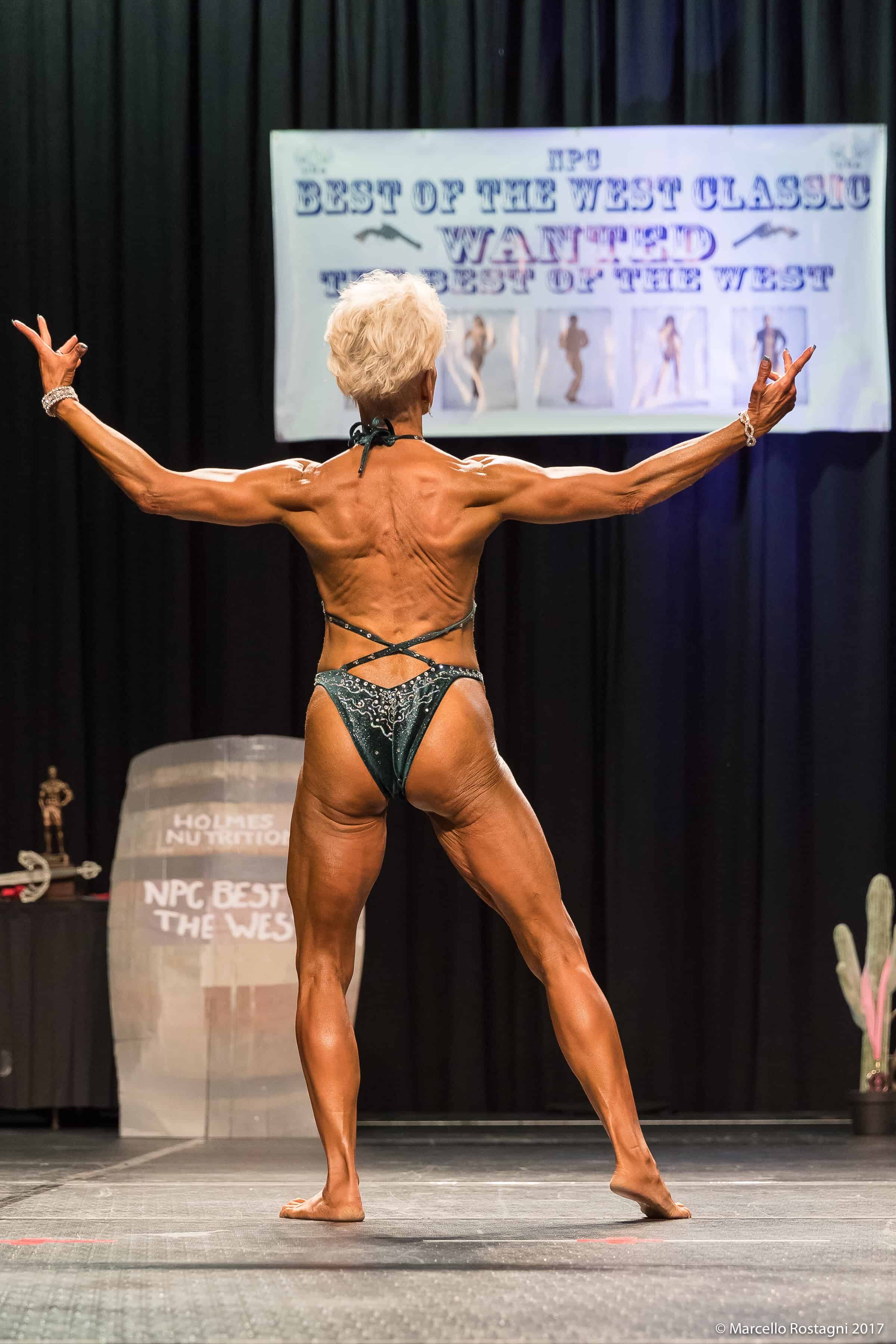 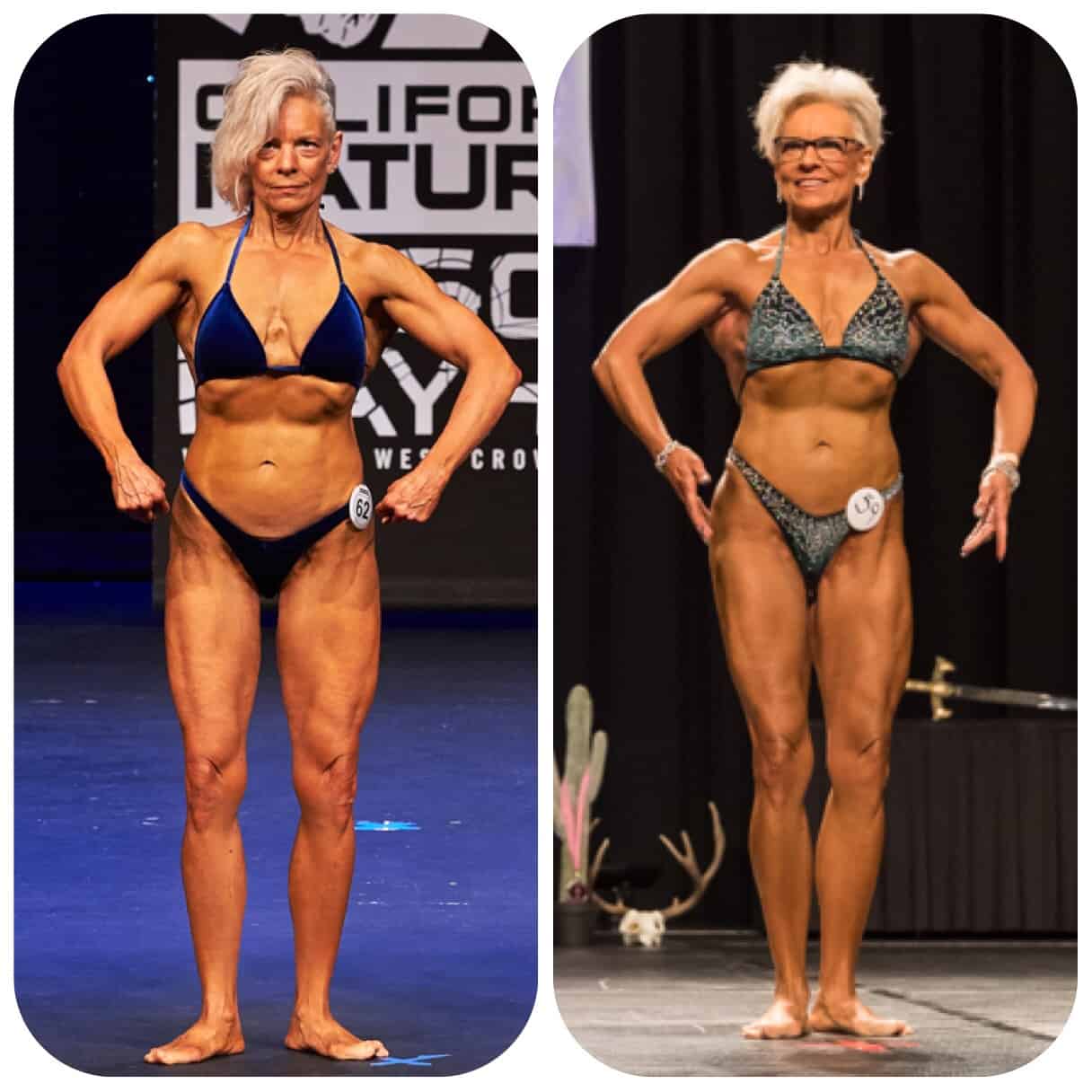 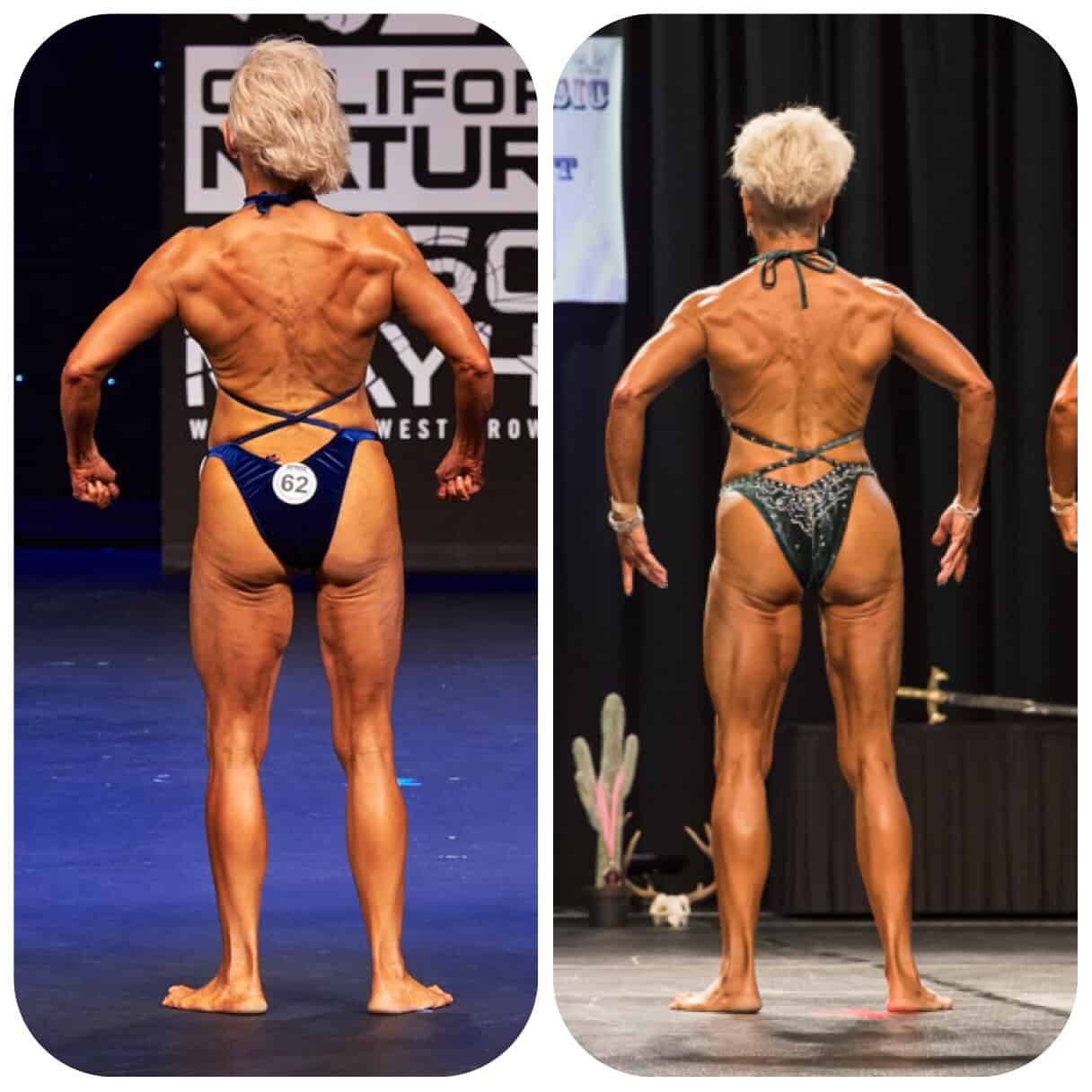 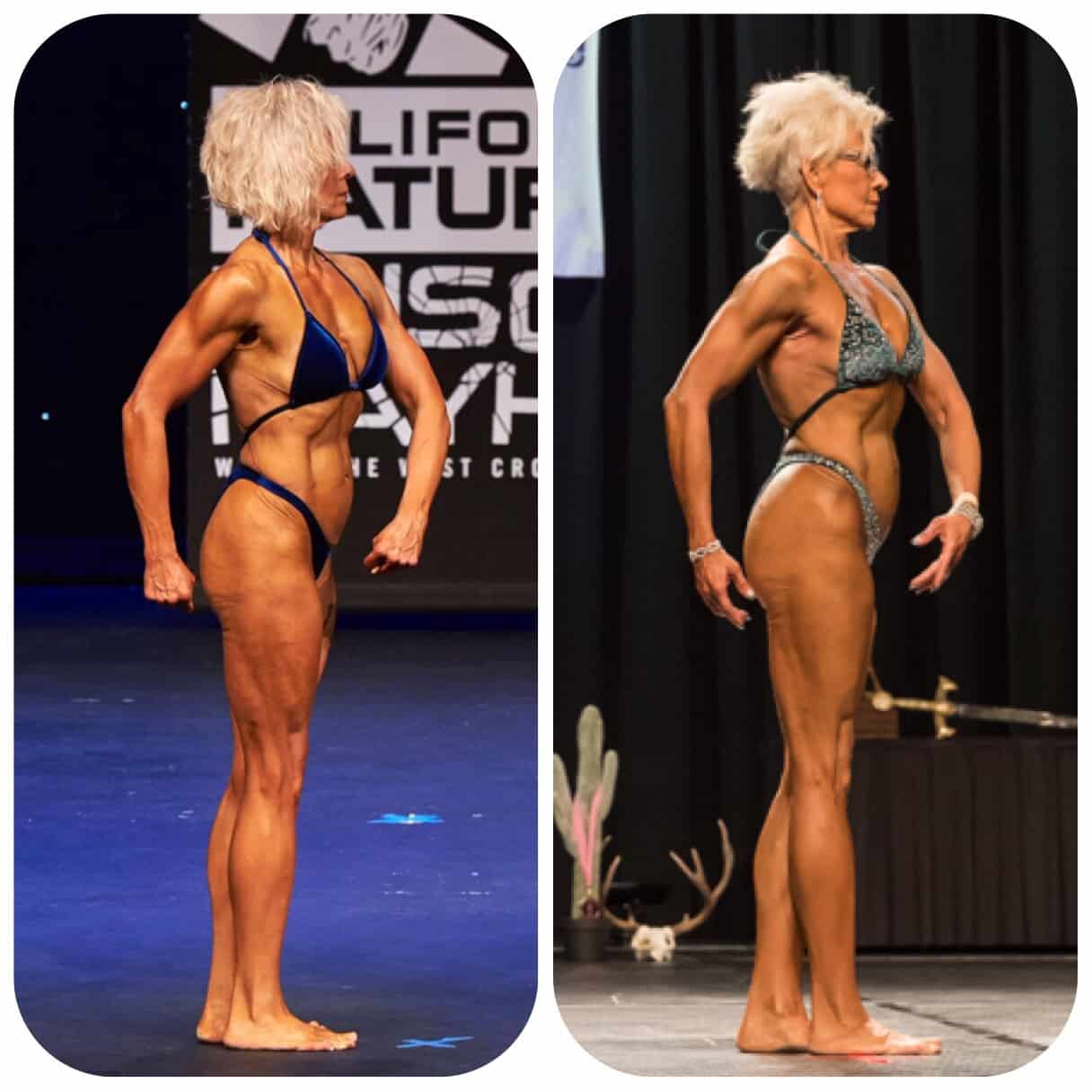 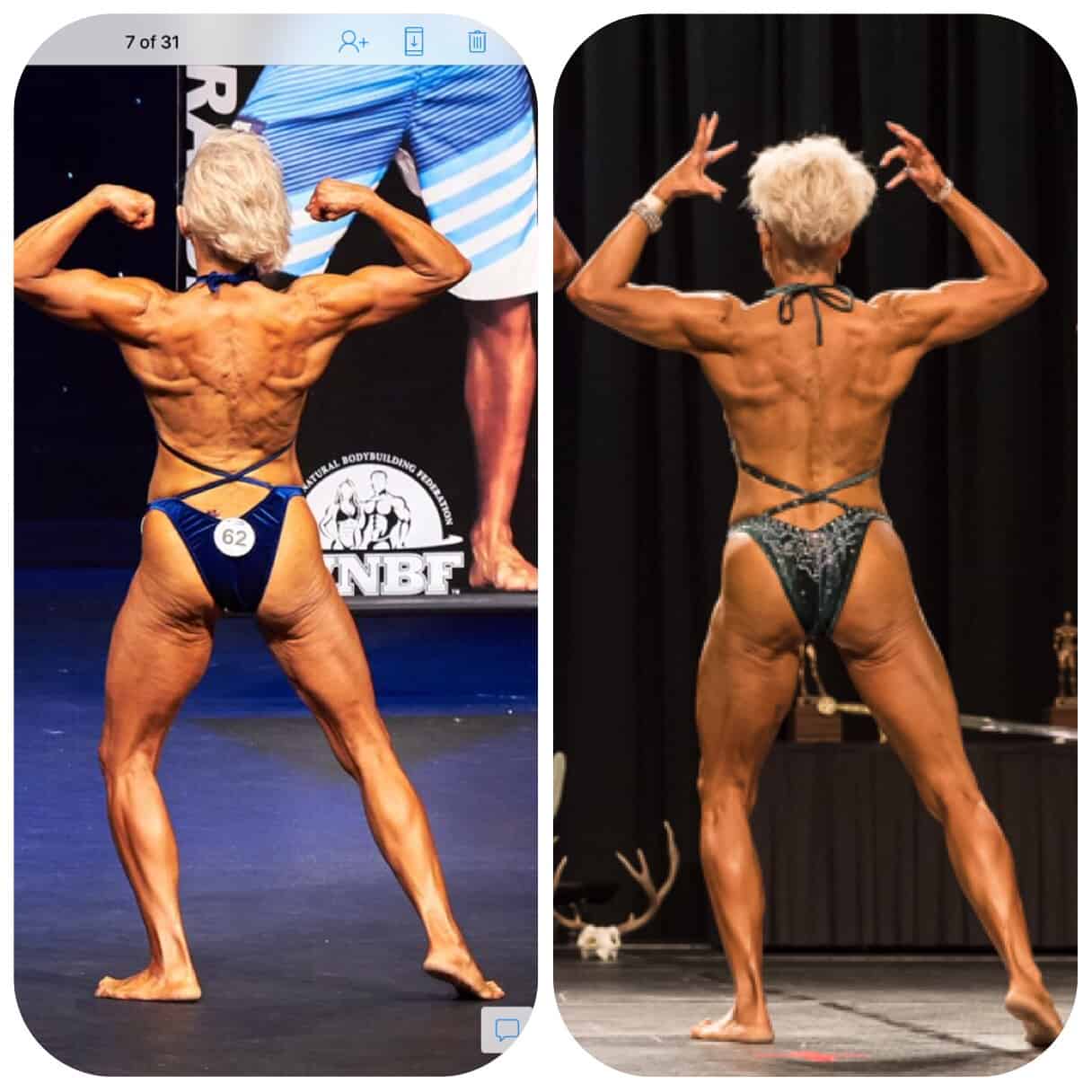 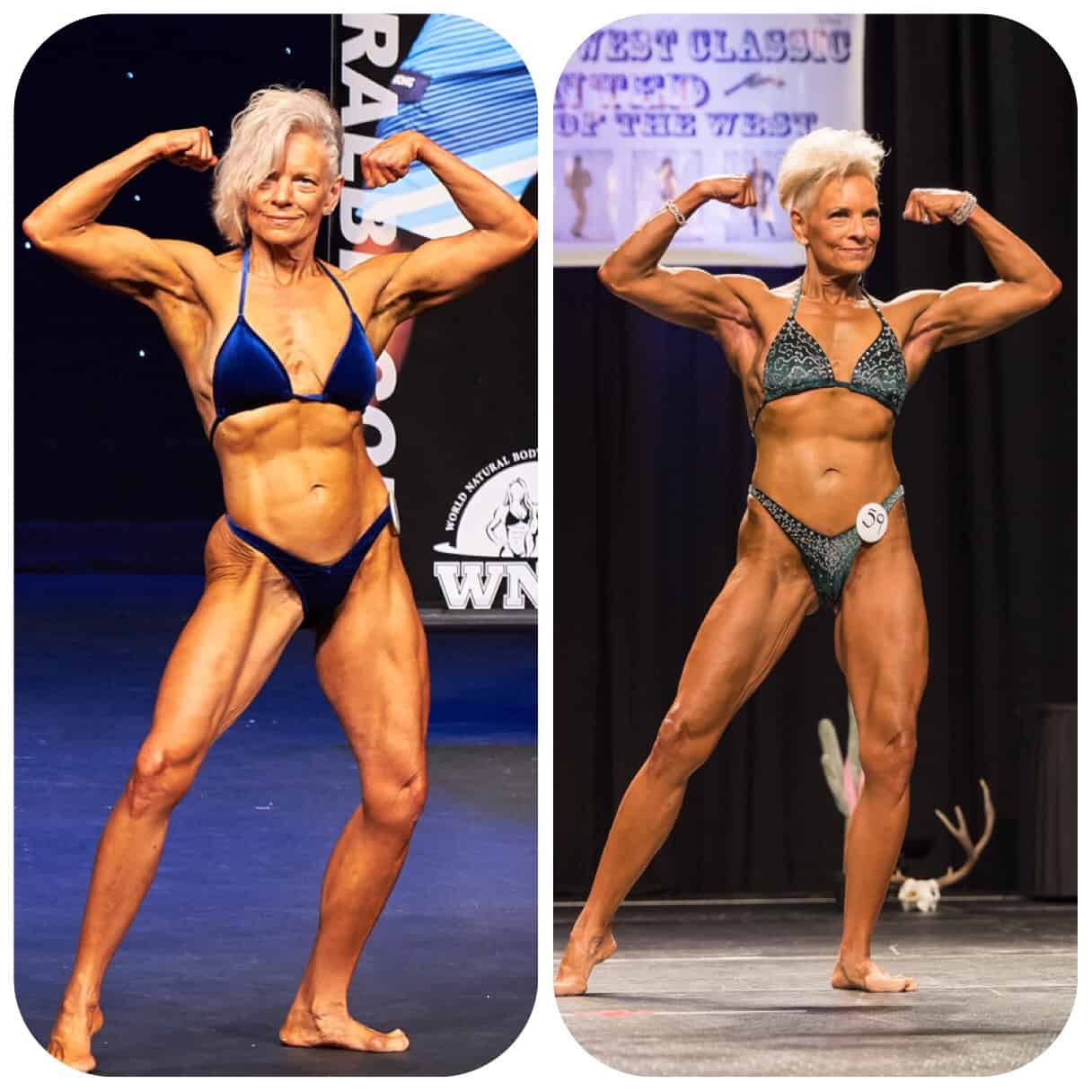 This is me after I dropped off the paperwork requesting an early retirement from teaching.  It included a letter of resignation effective at the end of this school year.

Not retiring from working – quite the opposite.  Because of bodybuilding, because of the 2015-2017 lesson, I’m brave enough now to believe I can teach on my own terms.  I want to teach math in a way I know is effective and helps kids. 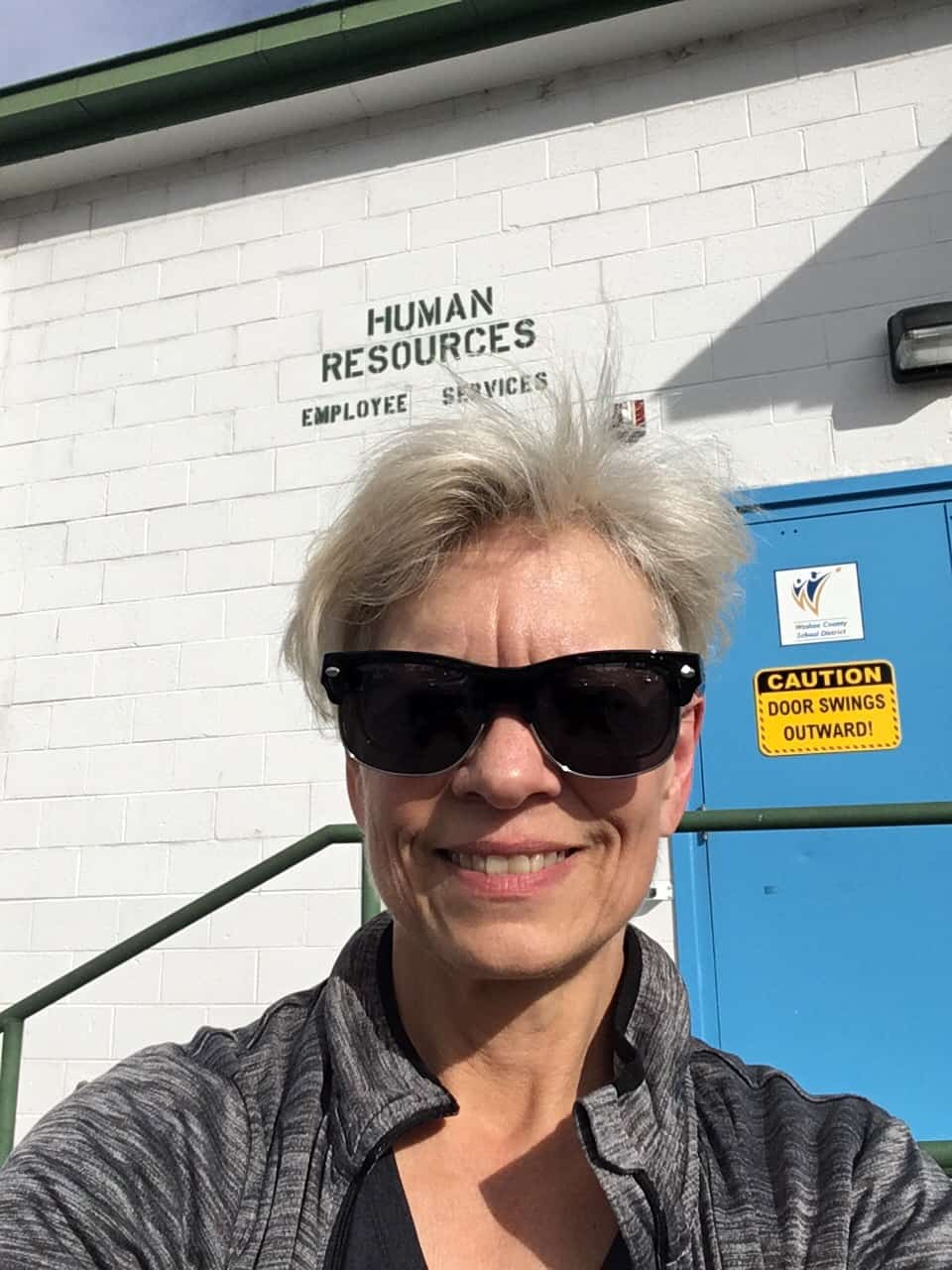 When I’ve told a few people I’m ‘retiring’, they say “Congratulations“, which I know is the appropriate response, but honestly, I feel like I’m losing something.   I love teaching math and I’m good at it.  It’s been my calling more so than my job.

I feel like I’m doing my best work now and I honestly thought I had a few more years left in my tank.  But lately, it’s been obvious that changes made in education have hurt kids.  It’s been bothering me too much that I’m part of it.

I stayed because I also know teachers can stave off some of that damage.

But something happened that crossed a line for me, personally.  It’s not necessary to get into it.  It’s sufficient to say that it was the “push” I needed to at least research my options.

If  stepping into a gym to ask for help was scary, stepping onto a stage was scary – this tops everything!  After 22 years as a government employee, I’m leaving early, so the retirement benefit will only half of my monthly income now.  Health insurance isn’t paid for retirees in my state anymore, either. I’ve analyzed and over-thunk the crap out of this since last spring when the last straw fell onto my back.

And then the 2017 competition season happened.

So I stopped thinking and acted.  I will make this work.  When I get worried, I flip my script and stay focused on the  exciting opportunity ahead that is pulling me out.

I’ve been working with a business mentor to start my own business as an online math coach/tutor specializing in closing learning gaps in that keep kids from being successful in geometry.

If the negative stuff was the “push”, this is the “pull”  I’m excited!

There will also be something similar happening with fitness online, but I’m still working out exactly what my niche will be in that world.

If you’re reading this now, you will be one of the first to know about that when I’m ready.  My LMS peeps have been with me for years, so it’s important to me to tell you about it first, and if turns out to be something helpful, you will get first dibs.

The plan is to have both sides of this online business ready for a “soft-opening” in January 2018.  Assuming the school board approves my request to leave, and assuming nothing else happens to change my plans, my last day as a public school teacher will be July 31, 2018.  Whatever the next thing is going to be, it needs to be fully functional by August.

Wish me luck!!  And as always – thank you for your encouragement and support!