About three weeks left until my competition.  So far, everything is still happening in a predictable fashion.  My nerves are coming up just as I knew they would.  My scale weight continues to drop.  Currently three pounds UNDER my previous stage weight.  I’m about 1.5 pounds away from my coach’s goal for my new stage weight.  I think I can beat that, too, because there are some things I’d like to see that I don’t see yet.  I think the glutes will lean out more because I tend to loose weight once food comes up a bit during the week.  Coach remembers that I lost weight during peak week last time, too.  Since we are this close, I’d like to find out where I need to be for the lower abs to be visible.  Not there yet.  It’s hard for me to talk about this stuff because I know the general population has a misconception about what “health” looks like.  Visible abs are not a measure of “health”.  Please read the disclaimer below.  This is part of my sport.  I really don’t give a shit if my abs are visible as a human walking around.  Doesn’t make me a better wife or teacher.   Doesn’t make me smarter or kinder.  It’s important only in context – there is a mandatory pose that I will be judged on called “abdominal-thigh”.  I would like to confidently have that one in my repertoire at some point.

DISCLAIMER: I share my story because I was able to transform my health after menopause using nutrition and exercise.  And the science is the same for general fitness as it is for bodybuilding – most of the time.  But remember – I’m now in prep for a competition.  My division, bodybuilding, requires a body fat percentage that is lower than what is considered “healthy” for the general population.  I’m post-menopausal, so I don’t have any issues with that to consider.  My thyroid function has been checked and everything is working optimally because that is a priority.  And for almost four years,  I’ve been working with a scary-smart and patient coach who I trust to prioritize my health over a placement.

Took progress pictures last week and realized that the suit I have that I wanted to wear is now, officially, too big.  The bottoms needed to be pulled up so far that it reminded me of that stereotypical “grandpa pants” look.  I’ve ordered my suits from the same place all this time and I know they can turn around an order pretty quickly, even a custom suit.  Sent them measurements and had the suit in a week.  I asked my coach to pick the color.  I really don’t care about my suit this time.  I just want it to fit and I want to feel comfortable.These are my pictures from this morning compared with my pictures from last August shortly after a mini-cut in my off-season.  Prep didn’t officially start until October. 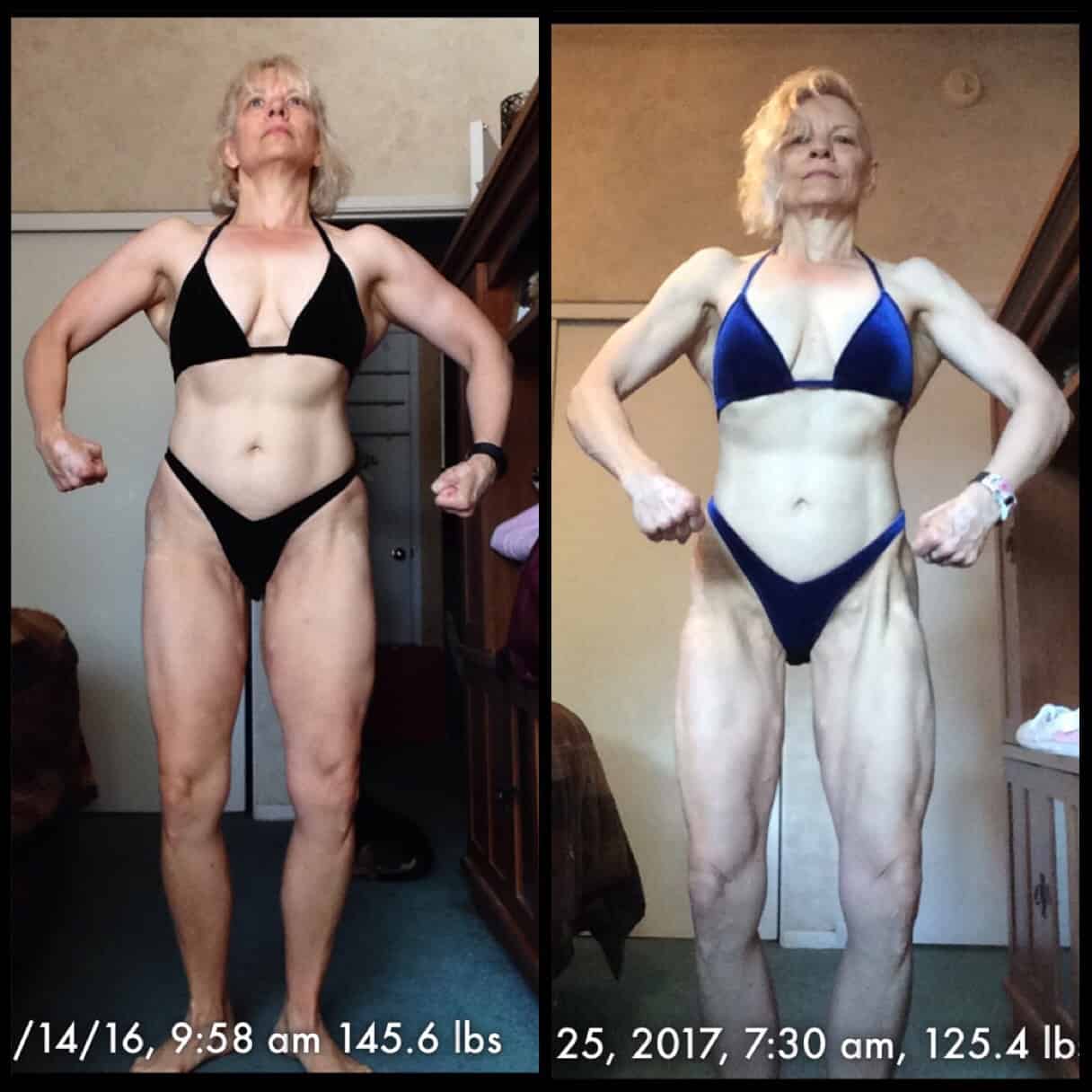 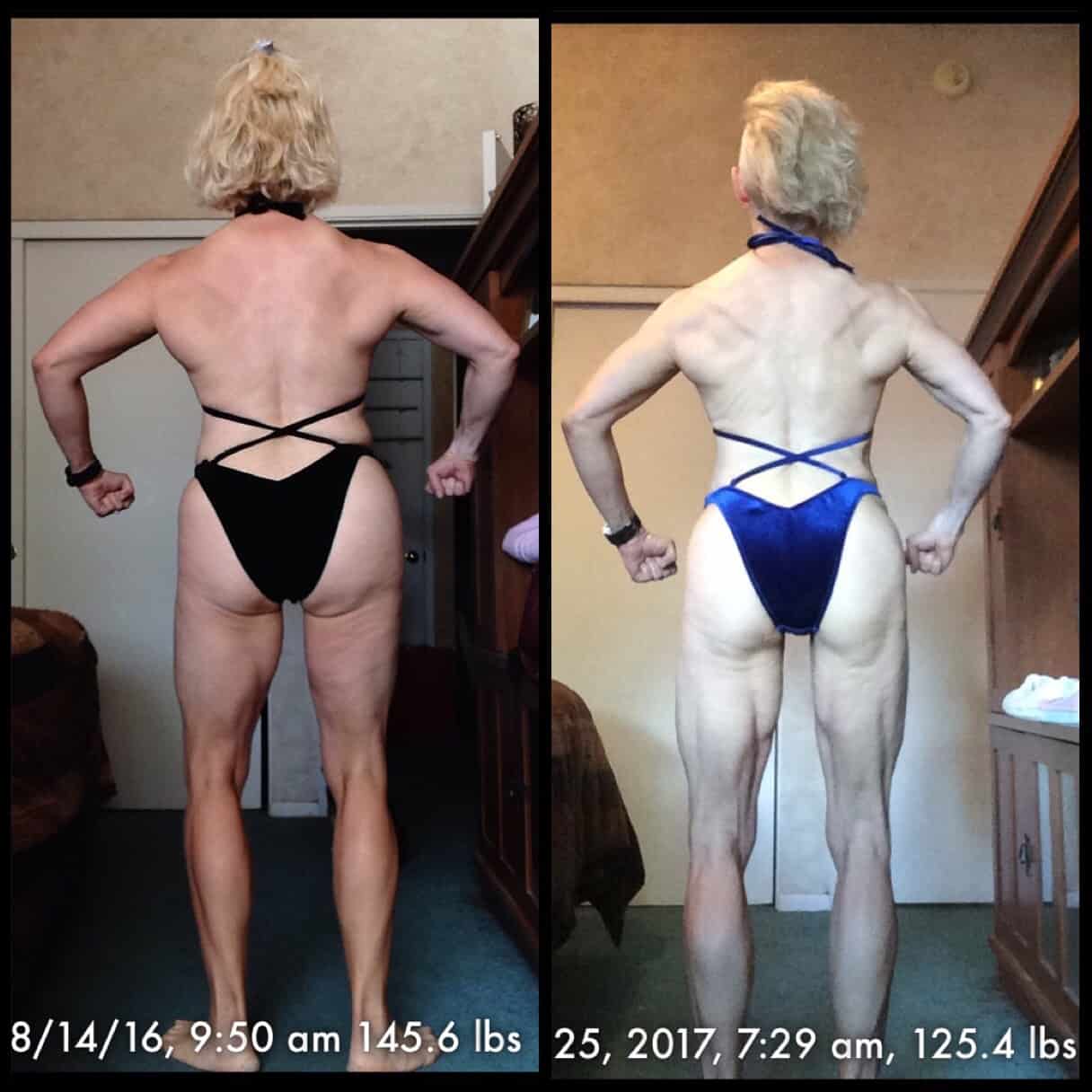 I started a scheduled deload this week in the gym.  I haven’t noticed much of a loss of strength, but I’m a little paranoid about injuries right now.  Pulling back a little is just fine.  I can push a little on cardio and fat loss for about another week, after that, two weeks out, cardio is going to be cut back a bit.  I’ve been going to the gym twice a day for about a month now.  Things need to be lifted.  Posing needs to be practiced.  If I didn’t get enough activity during the day, I will do another cardio.  They also have a water-massage table that I need to use every couple of days.

Nothing has changed with food. I’m still running 4 days a bit lower in carbs (around 130 g)  and then 3 days a little higher (around 200 g) to recover.  Protein was dropped once early in the prep and I hated it.   Since then, we brought protein up to 160 grams a day and never changed it.  I do well without a lot of fat – less than 25 grams usually.  My food preferences are lean and veggies all the time anyway.  Prep isn’t really much of a change for me – just a couple of food swaps here and there.  Regular peanut butter got swapped for PB2.  Used to use a whole egg with whites in the mornings, now I use just the whites.  Traded my favorite Skinny Cow ice cream sandwiches for sugar-free popsicles.  (I’m not a ‘clean eater’.  I eat what I like.  I just actually like real food with a few exceptions.  I don’t feel like I’m deprived.)   Got a little more food-focused in the last couple of weeks, but I know that’s because I’m pushing myself to be leaner than I’ve ever been in my life.  I’m pretty sure I’m working on some fat now that I’ve had since high school!  That makes my fat older than my coach!!  LOL!!!  And getting this lean is a new, sometimes scary, experience. I see things I’ve never seen before and don’t always recognize. “What is THAT?” “Is that a TUMOR?” No.  It was a vein. Cut me some slack on that one – at 55, we start looking for things that 20-somethings would never imagine, right?

Most days, I feel really good – or at least “normal”.  That surprises me a bit.  Grateful for it.  One of my goals for this prep was to do it as gracefully as possible.  I think that the mindset of “this is voluntary – I’m doing it for fun” helps.  I also know that I’m working with a coach who puts my health before results.  Results are long-term side effects of science-based protocols.  I’m patient.  I trust the process most days.  On the bad days, I just have faith in the consistency of it.

Honestly, I’m not a diplomatic, sugar-coating, sort of person anyway.  I’m pretty blunt and straight-forward when I’m not stressed.  Physically, I’m stressed right now.  Keeping the mental game positive (if you’ve been following along you know why that’s a challenge for me going back to this show) is also a little stressful some days.  My tongue is sharper now.  And I’m faster to use it.  All I can do is promise that I’m doing my best to be a nice human – which is a challenge for me even when I can have comfort food.  😉

Started thinking about doing a second show this fall.  It’s local, so there won’t be transportation and hotel costs.  Let’s see how this first one goes.  I’ve been working hard for a couple of years now.  If I think there is a little more that can be accomplished with this version of my physique, I’d like to keep pushing.  It hasn’t felt like too much of a grind – teaching is harder, actually.   Isn’t that an interesting observation?

In other news, summer school started last week.  I have 26 kids working in the mornings until noon.  I set up everything so they could work at their own pace and get help from me as needed.  They jumped in and are doing great!  There were some stressful issues over the first couple of days since I didn’t have access to the district’s online attendance and gradebook program, but once that was fixed, I got things caught up.  And then the AC broke.  But again, our building’s maintenance staff got on it, had the district out to fix it by the end of the week.  I wanted to teach summer school to help keep my mind off the show.  Nerves are going to be an issue this time around.  I also knew I wanted to run bleachers in the morning – but even that’s not working out.  The track is being replaced and the field is locked up.  Plan B – walk around the school a few times in the morning before going in.  It’s a big building, so that’s not trivial.  Definitely safer.  Need to just trust that things are working out exactly how they should, right?