Seven years ago today, I made a leap of faith.  Three months’ prior, the event that sent me to the ER was an anxiety attack, but I didn’t know that on that afternoon in March 2009.  I thought it was a heart attack.  It could have been.  I wasn’t healthy.  I was being treated for high-blood pressure.  I was not taking care of myself.  I didn’t recognize myself in the mirror.  The old woman I saw wasn’t the image I had of myself when I had dreams at night.  I didn’t know how to be happy.   I was stressed because I felt like I needed to do everything and handle everything alone.  Many years before that, my mother died from a brain aneurysm when she was 56 – I was 29 at the time.  I guess I was just waiting for a similar fate and didn’t feel I could control it.  I loved my mom, but I didn’t want to die early, too.  That ER visit scared me and something changed.  I saw things differently. I decided that I was given a warning.  Maybe my mom was given one too, but didn’t recognize it?  Instead of thinking about myself from inside my fears and stress, I stepped aside and looked objectively at who I had become.   I saw a 47-year-old woman who volunteered to carry a lot of responsibilities, was going through the motions of daily life. but was also waiting for that thing to happen that was going to end me.

I used the rest of that school year to research and plan.  On June 19, 2009, I bought a Bodybugg, signed up for the nutritional coaching that came with it, and resolved to do whatever I was told to do. Seven years later, I’m working with a coach now who works with competitors.  The details of what I did are not nearly as important as the fact that I decided to act and not look back.  I promised – no I vowed – that this would be the last time I started over.  I would not quit.  I would not stop.  I would adjust things, I would power through things, but I would not stop.

It’s been a twisty path.  I’ve had some great successes and some disappointments that almost derailed me.    I’ve learned the mental game is more important then everything else.  For me, it is the most slippery thing to keep on track.   I know that negativity takes me off my trajectory.  I cannot indulge it, but I can’t ignore it either.  I lean into it.  I dig under it to figure out what I’m afraid of.

Based on my placings at the three competitions I’ve done, I’ve accomplished very little as a bodybuilder.  Last place three times.  There are days when that weighs on me.  But I am getting better at re framing that faster.  I still have a lot left to do in this sport.  It’s a bit of a mind-trip to be 54 years old, a 20-year veteran in my career, but starting at the bottom in this new thing.  But that’s OK.  I know it doesn’t really matter.  Let’s pretend I actually won at one of those shows I’ve done.  How would my life be different?

It would not be different.  Not one bit.  Nothing would change.

I’d still be married to the same awesome guy.  The dogs would still need to be walked.  Laundry and food prep would still need to be done.  Bills would still need to be paid.  I’d still train how I’m training.  I’d still be teaching and don’t think my students would learn geometry better if I win an overall.  In fact, I am beginning to figure out that being placed last three times has compelled me to learn more about growth vs fixed mindsets, positive psychology, and overcoming fears – all of which are impacting my teaching practice profoundly.  I’ve never failed like this before.  Learning how to cope with this is something I would never, ever have had to learn had I not decided to be a competitive bodybuilder at age 50.

There is a big BIG picture here, too.  No trophy is going to be as important as fixing my health.  A placing on stage won’t be celebrated more than what I’ve  accomplished already.  No matter what I’m doing in 2016, it’s what I did before that I’m asked about most often.  I did a transformation post-menopause, which is something I was told I wouldn’t be able to do.   Others look and think “I can do that, too.”   Having me standing over here, doing this thing, flies in the face of what people believe s possible – and that’s a big deal.  (And for my friends who know that I’m not always this enlightened,  I sincerely thank you for listening and not slapping me around too much.)

This is a photo of who I used to be back in June 2009 next to who I am now.  Please, please don’t be distracted by appearances.  It’s not about how I looked, but how I felt and how disconnected I was from everything.   My current situation – seven years of self-care, six years of lifting, three competitions done, and a year out from my next competition season during the summer of 2017.  (A not-so-fancy-first-thing-in-the-morning-over-exposed-lighting progress picture for coach.  I didn’t take a special picture for this blog, which I think now was a mistake.  LOL!) Same dog in both pictures.   You can’t see Peanut in the first picture, but he’s on the end of that leash.  And Peanut finds a way to photo bomb most of my progress pictures.  🙂 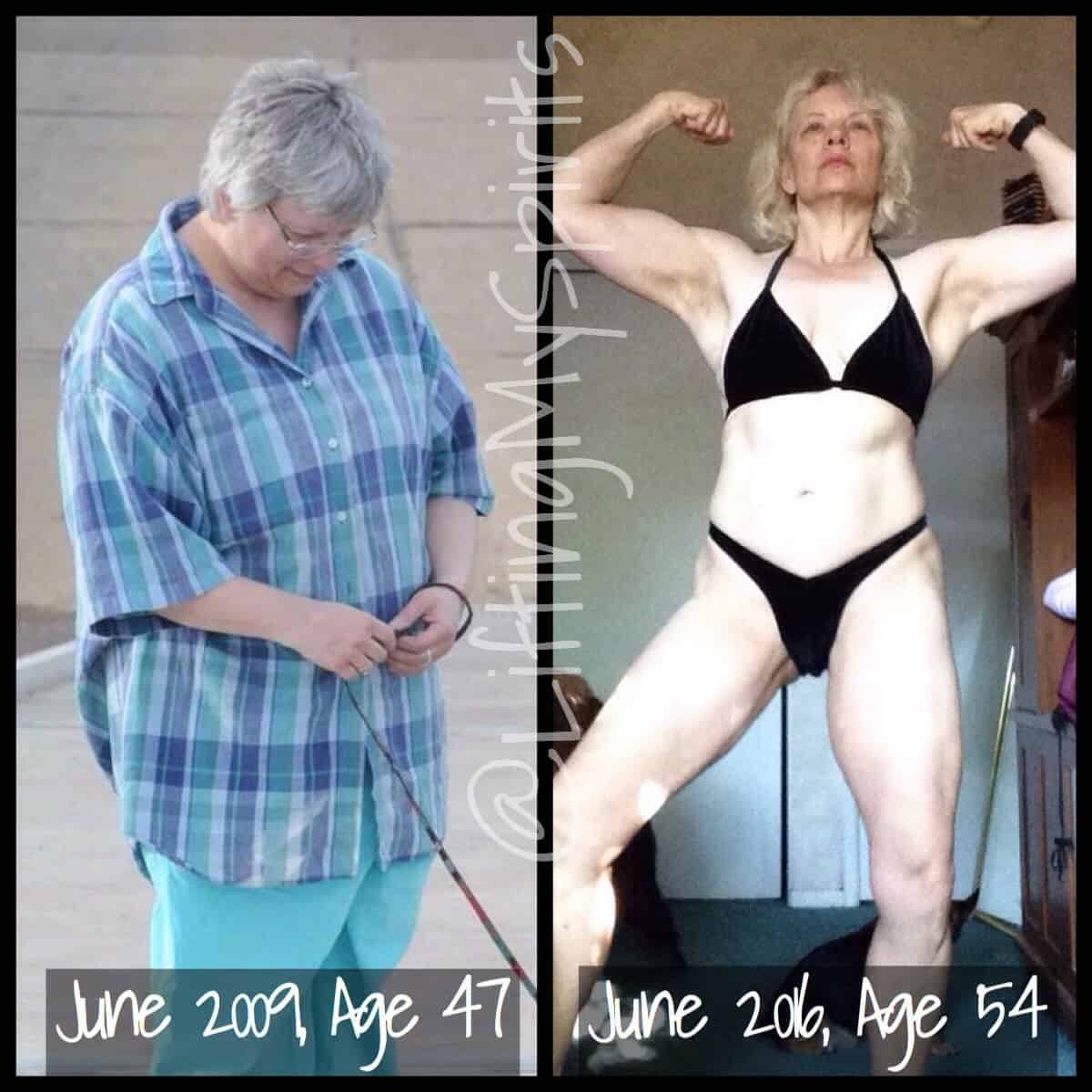 I can’t make it easier for anyone.  There is nothing complicated about what I did, but it isn’t easy.  It will probably take longer than you think.  It will be easier some days and harder on others.  Stars and planets will NOT realign to help you out.  No special workouts.  No special foods.   Just consistent work and doing what I knew I should be doing all along.  I’m just standing here saying it can be done, so adjust if necessary, but don’t quit.