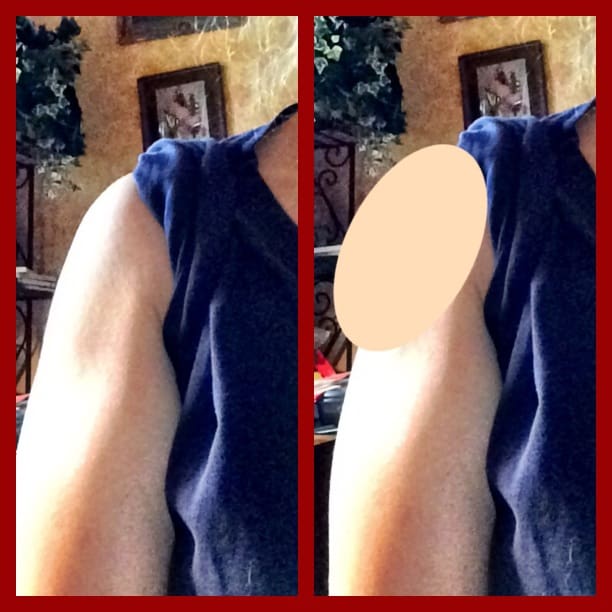 Full Disclosure: This photo has been altered. LOL!

I’ve always said that if I were to have implants inserted, they would go in my shoulders.

But no.  Not gonna happen.  I’m doing it the old-fashioned way.

I have other lagging parts, addressing them, but I also know posing can be adjusted to de-emphasize them on stage.  But not delts.  I need them for that V taper I want.

Last year, they started to grow a bit during the strongman training.  Between the log press and keg carry training, those delts were getting worked a lot.  It seems they like volume.  Coach has me doing something with shoulders every workout.  The reps and weights vary – not always heavy.  They are recovering well and feel healthy.  If I need to, I give them a break.

I like these lateral raises with kettlebells against a high incline bench to isolate the delts.  I had to modify it to a one-arm version because the little gym by my house doesn’t have pairs of kettlebells (lame), but I think that turned out to be a happy accident.  It’s easier for me to focus on form and try to keep the traps from working too much during this movement.

I received my new training block from coach this week.  It’s called “Tammy’s Healing Block”.  Perfect!  Four weeks with new exercises which will give my joints a break.  This semester has been been so stressful.  I’ve been training through sleep deprivation and distraction.   We are on Christmas break from school for the next three weeks and the timing is wonderful for this new block.  Squats have been replaced with leg press for a few weeks.  I am supposed to do sumo deadlifts instead of conventional – so I’ll have to bring the weight down since sumo is basically a new technique for me.  I’ve played around with it, but wasn’t serious about it.  This will be fun.

My last week as a middle school teacher was a roller-coaster.  My algebra kids took the high school final exam on Wednesday.  Our calendar is a little different than high school, so I had less instructional time to prepare them.  We got through it, but it’s been at a brutal pace.  Grades were lower than they are used to.  Kids and parents were worried.  The district policy is that 8th graders have to earn a 70% on that exam for it to be considered a “passed” exam.  (High school kids only need a 60%.)  After so many years as a calculus teacher getting kids ready for an AP exam, I used the same strategies on 8th graders – so it was a level of academic stress they haven’t had before.  We had fun, but they worked HARD.   I gave a practice exam the week before and predicted that 65% of my kids might earn a 70% on the actual exam.  That number of kids passing would be impressive and would be a big growth from previous years’ scores.  But it didn’t work out that way.  I ran those scantrons THREE times to verify what I saw – 72% of them passed!!!  If they were 9th graders, 82% of them would have passed!!!!!   I hoped they would do well, but I didn’t expect that.  I’m so proud of them for not cracking under the pressure and not giving up.  That’s really all I asked them to do in the minutes before the exam – don’t quit.  No matter what.  Push.  Can you even imagine how a success like that will impact a kid who puts it all together and hits an academic goal that big before entering high school? I’m so excited for them! 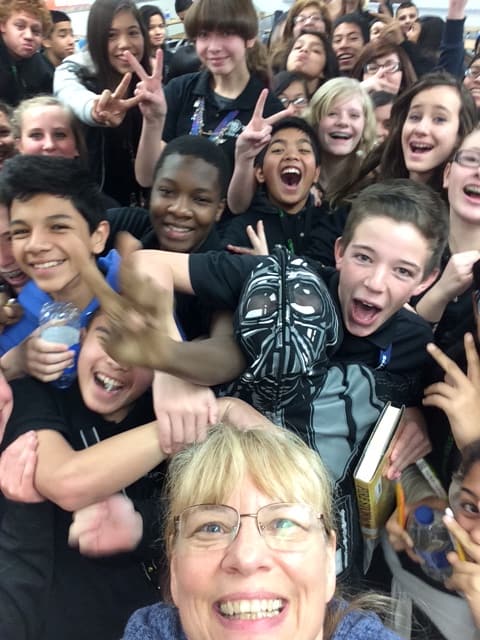 Look at the future – no need to worry. They got this.

I planned to wait until the last day to tell my students that I was leaving.  That was Thursday.  I knew it was going to be an emotional day, but it turned out to be one of the saddest days in my career as a teacher.  Early Wednesday evening a student from our school was hit by a car in a crosswalk.  She survived and is in the hospital – I cannot share details.  I honestly don’t know exactly what is happening with her, but it’s serious.  I’m assuming that “no news is good news” in this case.  Thursday morning, some kids knew already and the rest were told.  It was also the last day before Christmas vacation, which is always emotional.  I’ve done this for 19 years and I know that three weeks at home with family is not always a happy time.  I debated about whether to tell my classes that it was also my last day, but if I didn’t tell them, they would come back in January and I’d be gone with no explanation.  I wanted them to know that I will be teaching at the high school most of them would be attending in the fall.  (Mental note to self – I need to go to freshman orientation next summer.)

I went over to the new school yesterday to pick up keys and books.  It’s huge.  This will take some getting used to.  The teacher I’m replacing was a veteran who realized that it was time to leave.  It happens.  It’s a hard, but good decision to leave the classroom when you hit that point and I applaud her for her strength to do it.  I suppose that’s what I just did, too, but what saves me to fight another day is that it’s never been about kids. The education system is more oppressive now than it’s ever been since I started.  I am hopeful that this new spot is the right spot.  Everyone is telling me what I want to hear – let’s hope it’s true.  I’m a good teacher – damn good.  I’m effective if I’m allowed to use my energy to be a teacher and not a civil servant.  The last few years have been rough.  Those 8th grade algebra kids gave me an amazing gift – validation with data that every principal will understand.  After telling 105 kids that I needed to leave to protect my health, crying with those boys and girls,  hugging almost all of them, I decided that I will NEVER allow anything to distract me from the heart of my practice again.  Principals need to be stronger.  The best ones protect their non-compliant, highly effective teachers from the system.   There aren’t many administrators like that because the good ones won’t be hired by weak superintendents chosen by school boards of non-educators elected by the public.  (Yup – I have an opinion and I’m not afraid to use it.)  Fingers crossed that I’ve landed in the right building this time.

The next three weeks of break will be spent hanging with hubby, resting, lifting, packing, moving, setting up a new room, and lesson planning for new classes.  It feels like I’m getting my life back.  I’ve learned a lot.  Risks sometimes don’t work out.  Or – this was the path all along.  Time will tell.