30 Weeks Out: God Wrecks Your Plans When…

Some big news about work, life, stress… but first, the fun stuff.

My training program is really interesting to me.  It’s has some power lifting elements that I love – like max-testing. This week was a max-testing/deload week.  (I deload every 4 weeks and max-test every 8 weeks.)  I had four workouts this week, and for each one, I tested a lift or two, but backed off the other lifts that day.  I cut back a set and brought the weight down about 10%.

Here are the results…

Bench:  No change.  This is actually a good result.  Over the summer, my upper body responded very well to the program I was doing, but my legs didn’t grow as much.  So coach brought the bench volume down and increased volume on legs.

Squat: Increased 16% in 8 weeks!  (But I did pull a quad two days later and that rattled me a bit.  More about that later…)

Overhead Kettlebell Press: Decreased 12% – but I suspect that’s not accurate.  Tested it after the quad pull and I was distracted by things happening in life at the end of this week.  I chose not to push my body under the circumstances.

Dead Lift: No change.  I tested that lift this afternoon.  It felt better than a week ago, but I was still overly cautious considering the quad pull and the mental distractions.

Ok, so about that quad pull…

I ordered these shoe lifts online and they arrived in time for me to use when testing my squat. 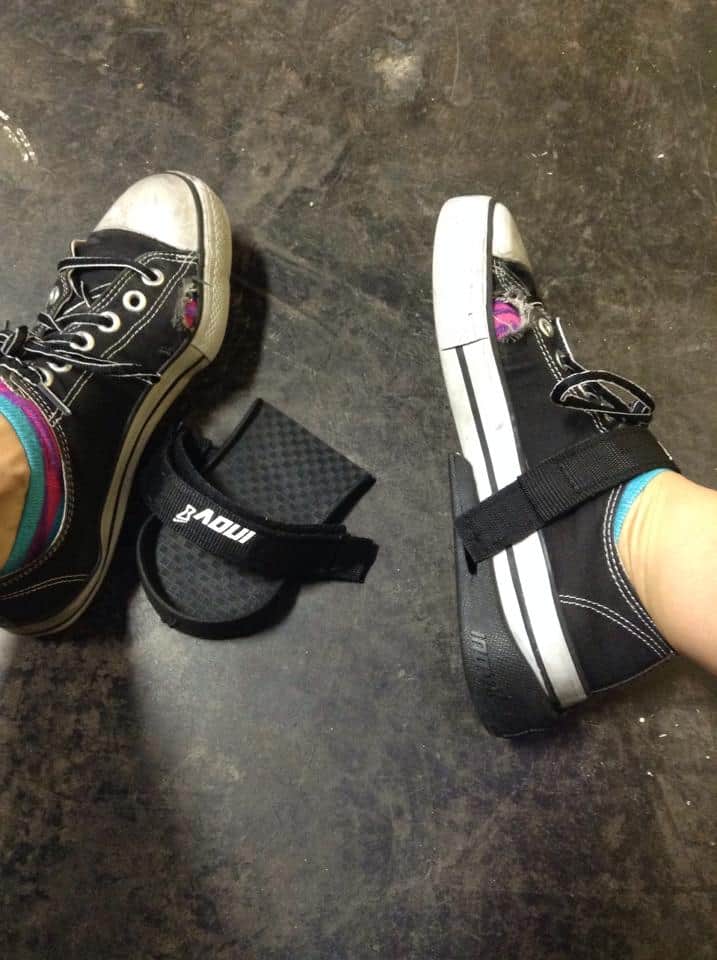 I didn’t think I would use them for the heavy set, but the warm up sets felt great, so I kept them on.  They stayed tight on my shoes and the extra heel height helped me get decent depth.  I noticed that I tipped forward a little on the bottom, which I’m told is normal when a person starts wearing lifting shoes.  I felt strong, but I had set a goal, and quit testing when I hit it.  I might have had more, but because of the new lifts, I decided not to push it.  The change in geometry could cause a problem with heavier weight.  I’ll be testing again in a couple months, so that gives me time to adjust form to the lifts.

Two days later, after I tested my barbell row, I was supposed to do three sets of light squats.  Warm up sets went well.  First rep of the working set with a weight that was 70 lbs less than what I what I lifted two days earlier – BOING!  Pulled a quad on the right side.  At first, it felt like something happened with the IT band, but after I walked on it a couple minutes and the nerves settled a bit, I could tell it was muscle, probably a part of the vastus lateralis that I hit differently  using those shoe lifts.

Well, that’s my theory, anyway.  And with that, quad work ended for the week.  Left quad is already bigger than the right, so I don’t want to work it alone.  It’s OK.  Rest is good, too.  The pull felt better the next day, and three days later, it’s just tender.  I’ve been icing it every evening.  Took ibuprofen a couple times.  I expect it to heal soon.

I took a rest day after this workout.  The next time I was at the gym, I tested kettlebell overhead press.  I can’t lie – I didn’t really try.  Over the years, I’ve had problems with both shoulders.  I’m usually a little sleep deprived by Thursday each week, and there was more stress this week than usual. (I know right?  How can I have even MORE stress?  You all must think I’m a drama queen by now, but I’ll explain in a minute.)   I was supposed to use the 35 lb kettlebell, and while I stared at it, I did a little inventory.  Left knee has tendinitis, right quad is pulled, but right now, both shoulders are healthy – and that’s rare.  I grabbed the 30 lb kettlebell instead.  Thought I would just go for reps, but I only got 5 when last week, I did 8 with this weight.  Know what?  I don’t care.  It’s not important.  The 1 rep max is used to set up spreadsheet numbers for the next cycle.  I can always pick up a heavier weight if I feel good.  This was not that day because I just couldn’t risk another injury this week.  I still wanted to do something heavy with delts, so I headed over to a Hammer Smith delt raise machine and knocked out a couple sets of 40 lbs for 5 reps.  That’s a safer option because the weight can’t fall backwards on a machine and rip up my shoulder.  That weight isn’t even a PR.  I’ve done 50 lbs on it before, but that was about a year ago.

And why I was mentally distracted…

My knees have been hurting  and now this new pull?  I’m not getting enough rest to recover from my training.   I wake up too early with a “to do” list running through my head.   I can feel my that cortisol levels have been higher more often lately.  Hubby has expressed his concern a few times in the last couple months.  So the quad pull was the ‘last straw’ with respect to how far I’m going to allow work stress to impact my health.  I hate having to do it, but I will leave my current position after this semester and return to the high school level, even though it will be a high school I haven’t worked at before.  I know several people there, and I understand how high school works, so it should be an easy transition.  I love middle school kids and I think I’ve been a pretty good middle school teacher, but my life is not working well with the demands on energy and the long days.  That makes it a little dangerous considering how I train.  Husband’s worries are justified.

Once the decision was made, I contacted a vice principal at the high school most of my 8th graders will attend next year.  I used to work with her a few years ago and she knows how I operate as a teacher better than most.   I was asked to come over for a visit the next day.  Turns out that they have a mid-year opening in the their math department – which is very unusual.  I know things can change and usually do, but the teaching assignment they asked me to take will be easier to manage than the one I have now.    I spoke with my current principal the next morning and she was understanding and supportive.  She didn’t hesitate to agree to the transfer, even though she could have said “no”.  This is not a voluntary transfer period and there aren’t math teachers floating around without jobs in December.  Even though it took  me a long time for me to accept that this wasn’t working, once I did, the transfer happened in less than a day – yesterday.  Our district has one more week of school before a three week Christmas break. During that break, I will be packing and moving again.

I feel horrible about leaving my kids. This kind of change can be so disruptive to their learning.  It was painfully hard to leave my high school kids last June and here I am doing it again.  My decisions impact too many kids and  I lose sleep over that, too.  I am praying that the person who takes my position will know that it’s going to be hard on the kids and will be patient with them.    In 5 months, a few of these puppies have become pretty special to me.  It helps to remind myself that 8th grade is one year – they will be in high school for four years (I hope).  It’s a much bigger place and they will find all kinds of cracks to fall into without someone looking out for them.   Maybe this is the way things were supposed to happen?  I did not want to transfer to this high school last spring.  I wanted to change levels. It wasn’t a mistake.  I needed to do it.   I learned a lot and I reconnected with a passion for teaching that I haven’t felt in a long time.  When my kids get there, they will already have a “home room” and a friendly face waiting for them.  And hugs.  And pep talks.  And butt-kicks. And more pep talks.    I will find them on day 1 so they will know I’ve got their back.