I haven’t had time to write.  Our school district is on fall break now, so I have time to catch my breath, catch up on sleep, and document what’s been going on.  To be honest, I haven’t wanted to write, either.  I haven’t felt like sharing.  Most people are encouraging and supportive, and I’m grateful for that.  I could use it right now.  But sometimes, thoughtless and rude things are said.  I’m getting up at 3 am to get the lifts in, I don’t have weekend afternoons to do food prep anymore, and laundry is barely getting done.  So I just don’t have the time to even think about social media drama when undies get bunched about my life as a bodybuilder.

In my last post, “A Snapshot of My Day“, I described what a typical day looks like.  Hubby is worried – he knows what happens when I have too much stress for too long.  So I promised to make some changes and I did.  My days are still long, but I’ve done a pretty good job of not working past 3 pm during the week so I can be headed towards bed by 7 pm.   About two nights a week, I’m waking up too soon (between 1:30 -2 am) and not falling back to sleep.  That makes for a rough day, but I usually sleep very soundly the next night.  I spend one weekend day doing chores, working out, and food shopping.  The other day also has a lift, but then it’s all grading and lesson planning.    Cooking is happening every day, or every other day now, instead of on Sunday afternoons.  I’m trying to not worry about how this stress and sleep pattern is mucking up my hormones because worrying about it doesn’t help me control it at all.

Lifting has been going according to plan most of the time.   I skipped dead lifts one morning just because I didn’t have enough sleep, low back was already sore, and it seemed like a stupid idea to do deads that morning.  I intended to do them the next day, but something came up.  Hubby and I are sharing a car, so every day things need to be choreographed.  It’s working pretty well.  Getting the lifts done super early helps.

For Thursday’s dead lifts, I used a sumo stance again.  I haven’t used that stance for about six months because it felt very wobbly.  I felt stronger, but also noticed I wasn’t pulling evenly.  Looked at the video in slow motion and found the problem – I’m straightening my right leg sooner than my left.  Went back and looked at old video of my conventional dead lifts and saw it then, too.  I spent a few minutes researching it online and never saw anything referring to that form issue.  So I guess this is my next problem to fix.  Glad I found it.  Might explain the pain I get in my right low back and it might be a muscle imbalance from the pulled hip flexor a few years ago.  It could also be caused by the scoliosis – one leg is longer than the other.  A friend suggested I try a lift on the short leg. 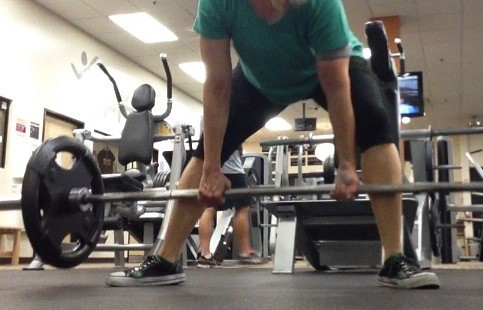 Tried the sumo stance again yesterday.  You’ll see the near disaster as it occurred in this video:

I’ve been on a very slow cut for the last month.  Sleep determines how well that works.  It looked like progressed stalled, but I knew that wasn’t the case – I just needed sleep.  The last two nights I’ve gotten a decent amount of sleep (7.5 and 8 hours), so the scale responded.  I’ve lost about 2 pounds in a month with a small calorie deficit and about one additional cardio a week.  No, that’s not fast enough.  But considering the amount of stress I’ve been working under the last month, I’m grateful for it.

Did I mention that work has been unbelievably stressful?   The amount of energy on my part to teach 8th graders is crazy high.  I’m on my feet all day.  I have great kids, but there are thirty 13-year-olds in a room at a time, some with typical behaviors. (I’m completely fascinated boys and with their sociology regarding pencils.  They either don’t have one, someone took theirs and they are arguing about it, or they broke it.  So much pencil drama.  It’s fascinating.)  Lesson plans have to be tight.  There is no winging-it.  I teach 5 periods a day, but 4 different levels of math.  Trying to prepare 20 engaging, activity-based lessons a week for new classes in a new school, well, it’s been a challenge. (Most of my colleagues only have to prep 5, but not more than 10 lessons a week.  Not sure why anyone thought the new teacher would be able to handle this schedule.)  Every minute of my day has been about prepping the next class.  Then, toss in grading… lots of stress related to finding time to get this all done.

I’m not working too late, but if my lessons aren’t ready for the next day, I don’t sleep well.  I’ve been told that a change to my schedule will be made after break to reduce the number of different classes I teach from 4 to 3, but we’ll see.  This same change was proposed to me the first week of school, but it didn’t happen.  Principal said it’s a go.  I’ll wait and see.

Well, that’s where I’m at.  Pushing through.  I’m really looking forward to this week off when I can get some rest, time at home, some time in nature, and some lifting in daylight.