If you already know my story, skip down a bit for my regular update where you can see video of me NOT getting my deadlift PR today.  So sad.

My Story – the moderately short version with links to other relevant posts.  (For the long version, start reading my blog here.  There have been people who have read the whole thing and said it was interesting – I am humbled and honored that they did that, but I won’t guarantee it is a great read.  I just documented what I was doing and feeling at the time.)

On June 19, 2009, I started my work to fix things.  That was a year before I started this blog.  I didn’t have the bodybuilding goal at the time.  I just didn’t want to die early from personal neglect.  By June 2010, I set the big, scary goal to compete.  While on this journey, I found my bliss.  I found me.

I let those extra pounds grow on me for years. Blamed age and menopause.   Too busy to do anything about it. My wake up call was in March 2009 with an ER visit for what I thought was a heart attack.  I was 47, overweight borderline obese, overworked, over-stressed, on high blood pressure meds, and the doc was considering cholesterol meds, too.  The ER people took it seriously – I was there for 4 hours while they observed and tested my blood for markers of a cardiac event.  It was negative “this time” the doctor stressed.  THIS TIME.  My mother died from a brain aneurysm when she was 56 and I was 29.  As I got older, I became fearful that I would have a similar fate.  And I put myself on that same path.  I had tried to lose weight using various programs and gained it all back.  I promised myself that this time, it would be the last time.

I knew I would have to change a lot of things.  I used the time from March until June to finish the school year and research my plan of attack.  As a math teacher, I love data.  On June 19, 2009 I bought a BodyBugg and the phone coaching that they offered at that time.  I told myself that since it was important enough to spend money on, and that this was the last time I would need to lose this weight, so I would damn-well follow directions.  Kim, my nutrition coach, taught me a ton and I was a good student.  I screwed up from time to time and she taught me to log it and plan around it.  She taught me that it didn’t matter what I did occasionally, what mattered is what I did most of the time.  She taught me to look at the week, not the day – and that applied to food and weight.  I learned to use the scale as a tool – watched the fluctuations and when they happened.  I learned how my body worked.

I spent the first year just doing cardio.  I either walked outside or used the ellipticals at the gym.  The ellipticals were up on the second floor and I would watch the people lifting weights.  I played on the machines a little, and even though I’ve been facinated with the idea of lifting for decades, I didn’t want to look stupid, so I was too intimidated to do much.  Lost 40 pounds and plateaued.  I’ve since learned a lot about why that happened. Started to research cortisol and realized that it was a major player in my life long before I started this journey. (I have a category called “cortisol” since I’ve written about it so much.)

By the spring of 2010, everything stalled.  I wasn’t motivated and I started to gain weight back even though I was still consistent with the diet and cardio.  About that time, I reconnected with a high school friend – someone who I admired for her spunk and courage – she lost her fight with breast cancer.  I realized that nothing is guaranteed and that maybe I needed to grow a pair myself, and start living my life on my terms.   I researched more and learned that I needed to lift to change my body composition.  And then I remembered – back in the early 80’s, I used to be fascinated with bodybuilding.  I loved watching women doing routines at competitions – I thought they were so beautiful.  I was a Cory Everson groupie.  I worked at the desk in a gym and remembered how I was enthralled by this guy’s meals – tuna fish and backed potato.  I remember thinking that it was so cool to have a goal so big that it changed how you ate.

So in June 2010, when I was 48, I hired a trainer to teach me how to lift, set the goal to compete the summer I was 50 years old.  Did it.  Twice.   I decided to take a year off to make progress without being interrupted by contest prep.  I’m working with a new coach and doing some new, interesting things with my program.

And that’s my moderately short story.

This has continued to be an emotional time for me.  I didn’t just finish the school year, which is always a little bittersweet as my seniors graduate, but I also packed up and moved all my stuff to a new school.  I’ve started to feel a little closure and am getting excited to learn new things as I teach at a new level. 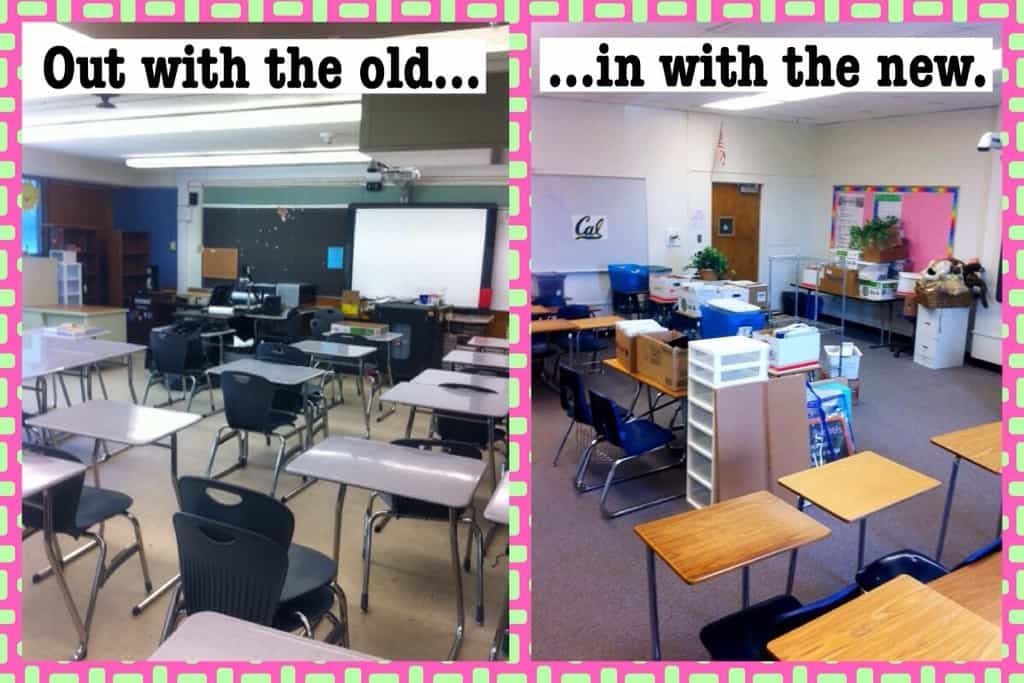 I wasn’t planning on making this move, and had to make the decision rather quickly, but I have a feeling that this is going to be a good change.  I started packing and moving some boxes last week, but worked on it all day Monday and Tuesday, and half a day on Wednesday.  The lifting wasn’t heavy, but the volume was high.  I knew it took a lot of energy because my calorie burns were pretty high.  I had to ramp up the carbs I ate on those days to keep up with the burn.  I didn’t get enough sleep, as usual.  Skipped the gym while I was doing this move.  My legs and glutes were sore every evening, so I thought it might be a good idea to just power through the move and get back to the routine when it was done.

So today, since it was my “birthday”, I wanted to set a new deadlift PR.  Maybe I could do it even though I moved all those boxes for three days prior?  Um…no.  It didn’t work.  Oh well.  I’ll get rested and take another run at it sometime soon.  I am off for summer break until the end of July, so I need to just relax and work my program.  The PR will happen.

My mental game is off lately.  I don’t really enjoy the program I’m doing right now.  But I don’t think it is the program.  I think it’s just the amount of stress I’ve been under the last couple months.  There hasn’t been enough sleep.  This is a tough transition for me to a place and a program that I worked so hard to build and start over at a middle school.  I pulled a pec a couple weeks – that sucks.  Overall strength is stalled – also sucks.  Once I’ve had a few days of vacation, a few days of sleeping in, I’m sure I will get back into the swing of things.

However, I have been happy with the amount of food I’ve been able to eat without gaining weight.  I’ve been trying to keep my fats and proteins consistent and increase carbs as needed to be at maintenance.  The BodyBugg gives me the data I use.   I know that the big jumps in burn are connected to the increased activity of moving my room, so I’ll have to bring those carbs back down when my burn drops.  Maybe.  Sometime in the next week, I will get a bike which will be my main mode of transportation to work from now on.  And that means…more carbs for me!  Yay!!!  Well, at least until it’s time to cut.  I do have to admit that eating some fast food for a few days while I was moving my classroom was kind of fun, but it didn’t feel good.  My energy wasn’t great.  It was nice to have something more “normal” on the patio when I got home after dropping off the last load of stuff at the new school.  Chicken breast, broccoli slaw, radishes, green onion, Annie’s Papaya-Poppy Seed dressing with an ice tea… 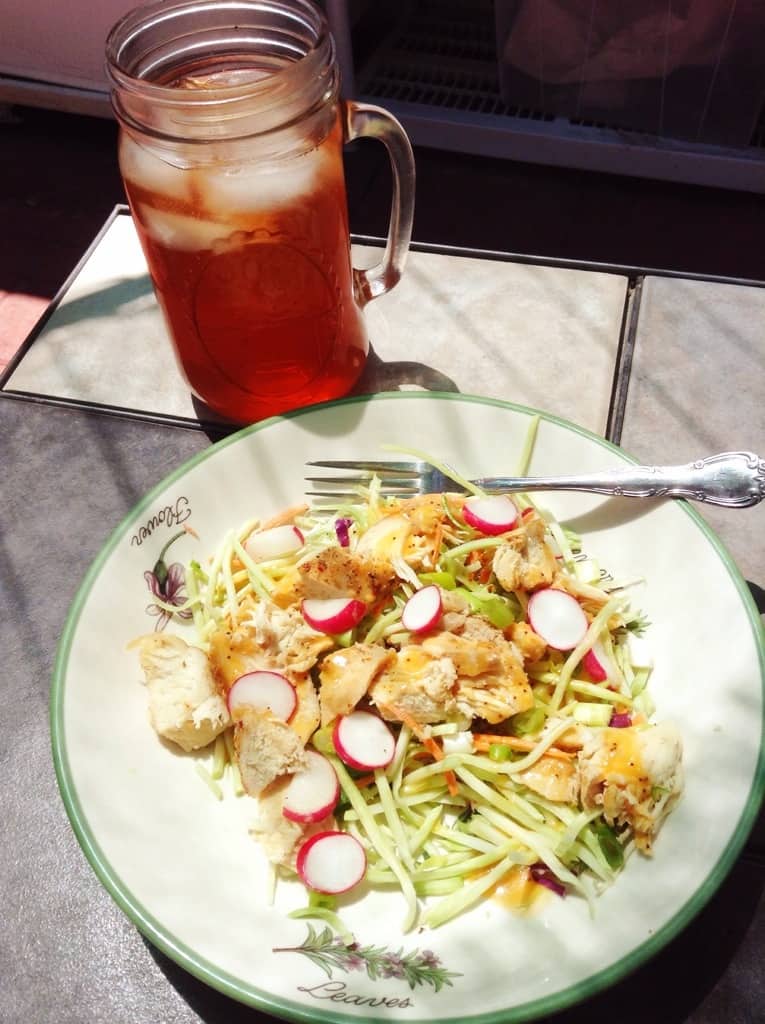 ***
I tend to get so preoccupied with what I need to do each day that I don’t take time to appreciate what I’ve accomplished. In the last 5 years, I’ve gotten off meds, became healthier than I’ve ever been, competed in two bodybuilding shows, and participated in one strongman meet.  At 52, I feel like a beginner in a sport that I hope to be able to do for a long time.  I love to lift.  I love to set and achieve goals.  I even love that I fail frequently.   My ego takes a beating regularly. There is always something I can’t do – lots of things I don’t do well. But I’m making progress. That’s what I love about my new “hobby”.  It gives me hope.  It gives me something to strive for.  And I’m addicted to the endorphins – and that’s not a bad addiction to have.