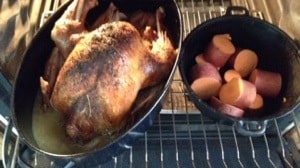 Today is Thanksgiving.  I’ve wanted to write all week, but have been slammed for time, so this morning, I’m thankful to have a peaceful day with the Hubby.  We don’t live near our family, so we usually have a low-key day together.  I make this as easy as possible.  Turkey is in the oven, sweet potatoes will go in a dutch oven, roasted Brussels sprouts with walnuts, feta cheese, and dried cranberries, a box of stuffing , and two pieces of frozen pecan pie.  Not a whole pie – two people and a whole pie?  There is no need for that.  We will be going to a movie and I will be eating movie popcorn.  That’s my treat.

My favorite part is that it’s a free day – no appointments, do no work at all.  OK, I’m doing a couple loads of laundry and a little cooking.  But that’s no biggie.  Hubby and I just hang out and relax.  Monday will be our 18th anniversary.   Love this guy!!!

My second favorite part of Thanksgiving is that my favorite bodybuilding food goes on sale.  I stock up.  Sweet potatoes, which I eat every day and they normally cost about $1 a pound, have been $o.32/lb this week!  I have about two months stocked up.  We’ll keep them in the cold garage since we don’t have a basement or root cellar.  Or I’ll cook and freeze them.  I don’t usually buy whole turkeys during the rest of the year – I prefer chicken breasts.  But the cheapest chicken I can get is about $2/lb and turkeys this week were $0.55/lb.  Sure, that includes the bones  and skin that will be tossed, but I think I’m still saving a little bit a coin.  I bought four of those birds this week.  I have one in the  oven right now, and three more in reserve.  We don’t have a big freezer, so I’ll have to cook them up and freeze the meat over the next few weeks.

So just when I think I’m ahead financially, all proud of myself for my frugal food purchases, I talked myself into ordering a pair of Versa Gripps.  Oh well.  I’ve wanted a pair for over a year.  Hubby helped rationalize it by saying that it’s a tool for what I do.  Yes, I guess it is.  Ordered these green ones…

The other day, I posted a little something about my mom on Facebook.  She died 23 years ago this week.  A high school friend made a comment about how the picture I posted of her from when I was two years old looked like my posing picture from my first show.  I never saw it before.  So I put them side-by-side.  Wow.  I know she would be proud of what I’ve accomplished because she raised me to be independent and strong.   I’m not sure how she would feel about posing suit on stage part, though.  I was thinking of her when I did that show.  Love you, Mom!!! 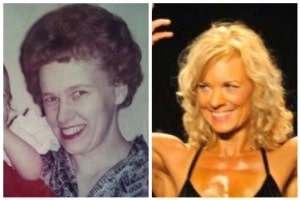 Yikes!  I haven’t written about my program in almost a month.

I am making some changes I’m excited about.  First, I’m about 95% sure I won’t be competing again until summer 2015.  After the show last June, I realized that since I’ve only been lifting for three years, I need a smart and long off season.  I’m not a beginner anymore, so those newbie gains are finished.  If I’m not smart about this, I’ll stall.  And despite my age (I’ll be 52 in February), I think I can make a good run at being competitive.  I didn’t do much with this body athletically my whole life, so even though it’s slightly ‘vintage’, it’s basically new in the package.  After a few months of contemplation, I’ve decided to branch out and pull some new people onto “Team Tammy”.  Not going to get into the details, but I’m learning a lot and feel confident that the next 18 months are going to be kind of amazing.  Hubby is 100% supportive.

Yesterday, I had this CRAZY idea of declaring a goal of being the oldest competitor on an Olympia stage.  I’m not ruling out the Natural Olympia – that’s actually a lot easier to do than the other – but I’m talking about an Olympia stage in an open class, not a Masters class.  Hell, I think I’m Grand Masters now…I don’t want to be competitive for my age.  I want to be competitive, period.  Doc said I have to get a colonoscopy now that I’m over 50.  I looked her right in the eye and said “I’m not over 50.”  I think I have issues.  Hahahaha!

There was a two week deload after four weeks on that German Volume Training (GVT) protocol.  Nothing much to report there.  I did pretty much the same thing, just fewer sets.  I liked the GVT, but now that I’m a few weeks away from it, I’m cool with not doing it again.  It did what it was supposed to do, I think.  There was a big psychological component to that training for me – it wasn’t strongman training.  After 8 weeks of that, I needed to do something completely different.

This week, I started a strength/hypertrophy split.  It’s not exactly like the PHAT routine Uber Beast Mode did, but it’s very similar. Everything is being hit twice a week.  The week looks like this…

I change up the exercises quite a bit.  I have this thing about that.  I think it’s called “boredom”.  I’ll justify it with concepts like “muscle confusion”, but it’s really just boredom.  When I play gym, it’s like going to a buffet.  I keep my big moves – deadlifts and squats, but I switch up everything else.  Take overhead presses, for example.  Sometimes I like barbell, other times dumbbells, but then there is that Hammer Smith machine, too – that’s fun.  Then there is sitting vs. standing.  So many toys!  So little time!

Well, not really.  Just doing a little cut right now.  My weight has been stable since the strongman, but I did gain body fat.  I’m cutting for about a month to drop down about 5 pounds.  The plan is the same smart plan so many others follow – stay less then 15 pounds over stage weight in the off season so contest prep isn’t so hard on the body.  I’m not too far off.  Got about 18 pounds up, but I’ve gained some muscle, too, so it’s more about dropping the body fat percentage down.  This has been an interesting cut, though.  I can tell there is more lean mass because it feels like I’m eating less than I am.  The calorie total is right around 1850 and I’m HUNGRY.  It’s all good.  It’s temporary.  Probably be done with it sometime in January.

Sadly, a cut includes cardio.  Booooo!  Just two or three times a week. I can suck it up and do a few cardios a week.  For fun, I decided to calibrate my BodyBugg to the step mill’s calorie counter because the step mill lets you enter your weight for that calculation.  You would think it would be close, right?  Not exactly… 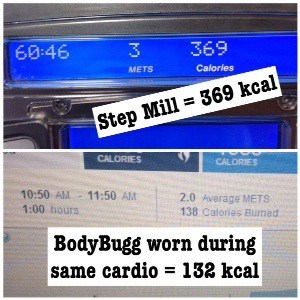 Sorry for the length.  Sometimes I have a topic and other times, like today, I just want to share what’s going on.

If you celebrate Thanksgiving, I hope your day is wonderful.