My scale weight is up about 4 pounds.  The articles online told me I should expect to gain (paraphrasing) “a serious amount of lean mass…up to 5 pounds of muscle”.  Maybe for a guy, but I don’t gain muscle that fast.  But I feel solid; not leaner, just more solid.  Diana, my massage therapist, says my muscles are more dense.  The DOMS (Delayed Onset Muscle Soreness) has been off the charts (Hahaha! More CHARTS!  Pun-intended). I know soreness is not a necessary evil for progress, but I also know how I felt during the strongman training – and I gained muscle and bone during that time.  So I like that pain.   I also know from two years of DXA scans that I don’t gain muscle without gaining about 4 times more fat, so out of the 4 pounds gained, I could not expect to have gained more than a pound of muscle.  I’m guessing more like 1/2 pound or less.

For background info on GVT, check out my blog after the first week.   There were four workouts each week.  Each one worked opposing muscle groups and there was one compound exercise for each muscle group.  Those big exercises had 10 sets x 10 reps, if I could do 10 reps.  After those 20 sets, I did 6 sets of assistance exercises.

Chest and Upper Back: total volume increased by 5,670 pounds. 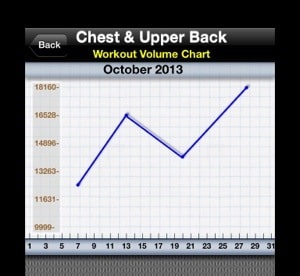 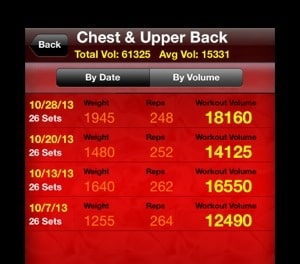 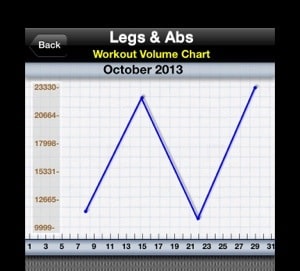 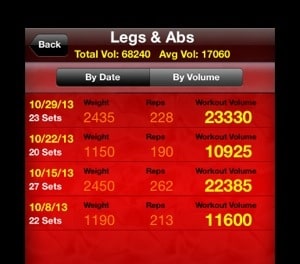 Seems pretty obvious that the first week was too light.  Not sure what happened on Week 3.  Maybe I forgot to log something?

Shoulders & Lats: total volume increased only 225 pounds.  Delts are my weakest part.  And the big, compound exercise for lats is assisted pull ups.  One of the guys at the gym told me after I finished 10 sets of them, most only 7 or 8 reps, that he was impressed that I would try to do any kind of pull up 100 times.  Week 4 of this workout was tough.  Progress stalled. 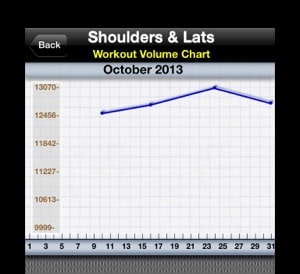 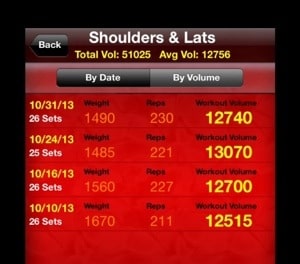 Biceps & Triceps: total volume increased 2,575 pounds.  It took a couple weeks to find the right triceps exercise.  Dips are recommended, but they really hurt my shoulder.  By week 3, I just went back to my old favorite – EZ Bar Skull Crushers. 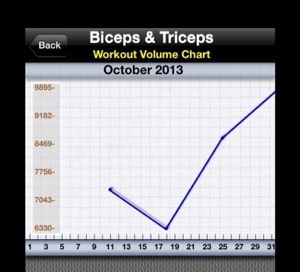 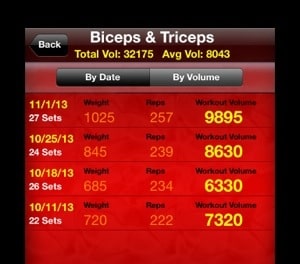 So what’s next?  I’m going to deload for a couple of weeks.  And then I will either do another cycle of GVT.  This was fun.