My life is a constant struggle with fear. I’m either wrestling with my own or I’m trying to help other people wrestle with theirs.  I’ve written about fear before.  It’s such a common experience many of us share, I wanted to write about it again tonight.  Here is what I’ve learned about fear.

FEAR is a THIEF.  How many people don’t live the life they are supposed to live because they are afraid?  Fear took my dream and left in it’s place a life full of safe routines.  I used to cling to those routines like a security blanket.  I “didn’t have time” to go to a gym and risk looking foolish – the old, fat woman who moved awkwardly and couldn’t do much very well.  Fear ruled my life for too many years.  My health suffered.  I was not being who I was supposed to be.

FEAR is a BARRIER.  It will stop you.  It will change your path.  I realized this after my mother died.  After I started to come out of the fog of grief, I looked back at my life and saw a series of decisions made to avoid something.  It was then that I made a promise to myself to not let fear define my life.  However, I forgot about that promise as the years went by.  Initially, my health transformation was about avoiding an early death – another decision based on fear.  But then I remembered.  I remembered my promise to myself.  I remembered that thing that fascinated me when I was much younger, but I was too afraid of it to try … bodybuilding.  Once I decided to do it, I didn’t see the barrier anymore.  I just assumed it was going to be a lot of work. 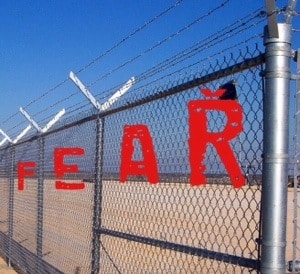 FEAR is a CHARMING LIAR.  “I can’t afford it.”  That’s what I told myself about getting the help I knew I needed.   Heck, I told myself that about just driving to the gym.   “I can do it myself.” That’s what fear told me.  I was afraid to invest in myself.  I was afraid to take the risk.  I knew that if I faced my fear and took the risk, I would NOT let myself fail.  I would NOT quit because that would make the money and time I spent be wasted.  Fear kept lying to me.  “You can’t do it.  You’re too old.  You’re too out of shape.”  I knew there was one thing I had to do to succeed – DON’T QUIT.  It was going to work.  I just needed to be patient and consistent. Fear continues to whisper in my ear.  I regularly have to push forward despite those little whispers.  The strong woman training and competition was a great example of how I battled with fear almost every day for 8 weeks.  It wasn’t whispering to me then – it was very convincing, very logical.  I wanted to quit every day.  I used a trick I’ve used before – I left myself notes on my bathroom mirror. 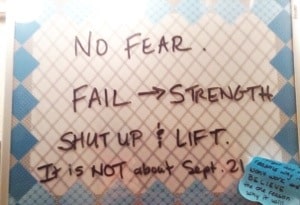 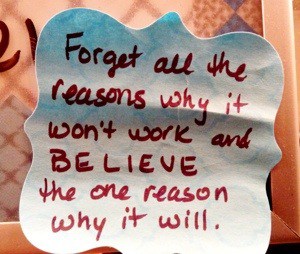 The first year of my journey was a struggle.  From June 2009 to June 2010, there was no blog.  There was no Facebook page.  It was just me making myself get up every day and do the thing I knew I needed to do.  It took a whole year before I fell in love with exercise.  That’s when I made the decision to do the thing that scared me the most – hire a trainer and learn to lift so I could become a bodybuilder.  The exhilaration of being that bold and pushing through my fear propelled me.  Everything I’ve accomplished since then is a milestone of another fear conquered.  Doing a posing routine on stage?  Yeah, that was a big fear.

I work with people of all ages now as they face things that scare them a little – or a lot.  I’m either their math teacher, their trainer, or their coach.  I try to offer a little courage when they need it.  Some take it, some don’t.  They aren’t ready.  When they are ready, I’ll be there.  I ask them to acknowledge the fear and act anyway.  Pretending it’s not there is like pretending there isn’t an elephant in the room.

I’m still afraid.  However, I’ve learned that the most rewarding things I’ve done have happened when I act in spite of my fear.  I love this…