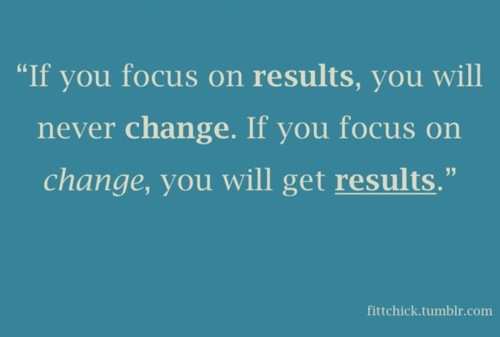 Part of a conversation I had with a very nice woman this morning.  She’s been working out at my gym on and off for the year I’ve been there.  I was cooling down on a treadmill while she was warming up on the treadmill next to me.  This conversation has occurred between me and others often enough, that it’s become a blog-worthy topic.

“I’ll give it two months” she told me.  This is how long she has committed to stick with her current program before she quits if she doesn’t see results.

We continued to talk about it.  I told her that I used to think like that, too.  It never occurred to me that this body needed to be cared for and properly fed…FOREVER…or until death, which ever comes first.  I, like a lot of people, thought losing weight was the goal, and once it was gone, I’d be done.

A paradigm shift needs to happen to be successful.  It’s not about losing something in the short term – it’s about gaining a new life.  It’s about living differently – not just for a couple months, but for the rest of your life.  And once this paradigm shift is made, and actions reflect the new point of view, the “rest of your life” will probably be longer and better.  Less stress. More joy.  Less fear.  More confidence.

Had she said, “I’ll give it two months and then I’ll assess my progress and make changes to the program“, our conversation would have been a lot different.  THAT makes sense.  If something in your program isn’t working, you change it, but you don’t quit.  She didn’t say that, though.  So I said,  “Your body is going to do what it’s going to do in it’s own time.  What if you needed two months and two weeks to reach a goal?”   Quitting at the two month deadline means she’d be quitting right before she was going to get the results she was looking for.  The key is consistency.  Never quit.  I needed three YEARS.  I had a lot to learn (and more to unlearn) in those three years about the care and feeding of this body I was blessed with 50 years ago.  I trashed it for the first 47 years.

Progress is change.  Change what you think. Change how you think.  Change what you do.  If you think it’s a chore, it kind of is at first – it’s maintenance.   I know so many people who take better care of their cars or their yards than their bodies.  Think about it – if you take care of your car so it will run properly without the extra expense of major repairs…because you drive around in it…why not take care of the vehicle your’re walking around in?  I would gladly cover our lawns with rocks if that’s what it would take to get my hubby to exercise everyday and eat better.  I want to grow old with HIM, not the backyard.  And while working in the yard is exercise, it’s not enough.

Are/were you one of those people who sets a timeframe to “get healthy” or “lose weight”?  This really is just my opinion, but does it makes sense to you?