I waited a week to tell you about this just in case I might hear something from the promoters of the show.  I had hoped to tell you not just what happened (many of you saw it), but why it happened.

My first bodybuilding contest last Saturday included something new. Audience members, people at the show and anyone watching the pay-per-view, had to opportunity to send a text to vote for their favorite competitor. The rules were published on the website and were explained to us competitors that morning. 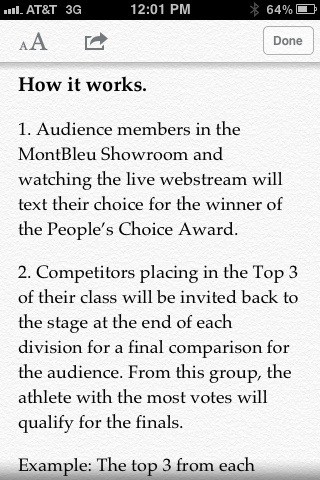 The promoter’s were very clear with us that morning about how, if we did place in the top 3 of our class, we were not supposed to leave the backstage area because we would be called back on stage for the text voting at the end of each division.

In my division, Women’s Physique, there were five competitors in three classes (A, B, C).  Two in Class A, two in Class B (my class), and one in Class C.  Based on the rules for the “People’s Choice” award, all five of us, 3 first places and 2 second places, would be back on stage for the text voting.  When I left the stage after receiving my 2nd place trophy, I had to wait for the Class C competitor to do her routine, and then the three first place winners were on stage for the Overall Women’s Physique winner to be chosen.  While I waited, I was handed a card for me to hold during the text voting that would happen after the overall trophy was given. 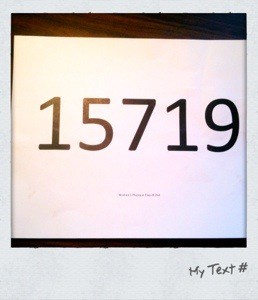 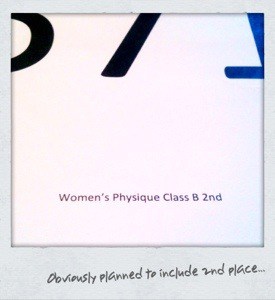 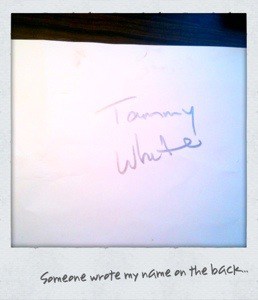 When it was time for me and the 2nd place winner from Class A to be called out, I was standing just off stage next to one of the two promoters.  He was running that side of the stage.  The emcee and the other promoter, were on the opposite side of the stage and I know they could see me because I had an unobstructed view of them.  The judges in the front row could see me.  Half of the audience could see me – because my friends told me they saw me standing there with my little card waiting.  The emcee started the text voting immediately without calling us back to the stage.  I looked at the promoter and another man who handed me the card.  They were also confused.  I was told something like …

“Don’t know what’s going on” and “Don’t know how we can fix this, maybe call you back during another division? “

I didn’t say anything.  I left to get some water and to find Coach to tell him what just happened.  I hung around for a while, and when no one came to tell me anything, I got dressed and went out into the audience to find my husband and my friend Dawn.  I’ve been told by people who watched the entire show, either in person or online, that this only happened once – just my division.  I don’t know if that’s true or not because I didn’t watch the show.  Maybe it will be evident on the the DVD I ordered when it comes out.

I started hearing from my friends immediately because I had my phone with my stuff backstage.  I had promoted this show and this “People’s Choice” opportunity on Facebook for months so my friends could participate.  I thought this was a unique and innovative way for people to engage with bodybuilding.  (Still think that.  Love the idea. )  Even though we were not called out, I’ve been told that all five text numbers appeared on the screen of the online pay-per-view, but only three names were called – the three women who earned 1st place in each class.  So it probably appeared as if the two of us were just MIA.  That’s embarrassing.

In the past week, I’ve been asked several times to explain what happened.   I have no idea.  I was never told, in person or in email, why the rules were not followed in my division.  I’ve never received an apology, either.  No word at all.

I hope it was an accident.

People have warned me that there are “politics” in shows, so I have to wonder.  It’s not my story to tell, but I will say that I found out that, during the afternoon between pre-judging and the night show,  something happened involving the show’s photographer, one of the promoters, and my husband.  My husband, a professional photographer, contacted the promoter the day before to ask for press credentials because he does freelance work for the local newspaper and some local magazines.  He didn’t want to show up with his professional equipment without permission.  He was given press credentials.  Very nice.  I made a point to introduce myself and thank the promoter during check in the night before the show.  Hubby told me he was told he had backstage access and could take pictures.  I was in the hotel room napping (or in the cafe eating) all afternoon, so I have no first hand knowledge of what happened.  Only heard my husband’s side of the story.  And – it’s important to be very clear on this –  I have not been told that what happened with these men had anything to do with the mishap during the night show.

But just in case it wasn’t an accident and I got a little payback for something that had nothing to do with me, know this… it is just a colorful thread in the story called “My First Bodybuilding Show”.  I had a wonderful experience.  I’m extremely proud of my accomplishment and am happy with how things turned out.  The “People’s Choice” thing had nothing to do with judging, and I’m satisfied with the judging.  When I saw Julie (1st place, Class B) earlier in the day, I told Coach that she’s going to win.  He didn’t like it, but you know what?  It didn’t matter.  I brought my best to the stage that day considering my novice status.  She had more muscle and more experience.  It was a fair result.  I performed better than I expected when I was in front of the judges, but I’m sure my inexperience showed.

I’ve been a teacher for 17 years.  The “politics” people refer to happens everywhere, and decisions in education are made using “politics” all the time.  So if, and that’s a big imaginary IF, that happened, let’s put in the the proper perspective.  A 50-year-old, former 200 pound, sick, high-school math teacher turned enthusiastic bodybuilder in her first show got dinged by a promoter because of something that had nothing to do with her?  If that happened, someone wasted life energy on drama, pettiness, and probably generated bad karma.  Big time bad karma that will probably fly around the planet and kick ass pretty quickly.  And it didn’t impact me at all.  My work speaks for itself.   200 pound fat chick to (approx) 125 pound semi-muscular fit chick on stage in a bikini.  At 50.  Not sure anyone who has always been fit has any idea how I feel.  (I know you guys probably do because you’ve been with me on this journey.)

Let’s assume best intentions – and in this case, “best intentions” would mean very nice, well-intentioned people made a mistake because they were not organized, weren’t paying attention, and haven’t had the good manners (yet) to contact me to explain what happened and apologize for (what they should think) embarrassing me in front of the planet.  (I embarrass myself daily in front of my classes, so I’m used to it.)

Lastly, if you purchased the pay-per-view just to participate with the text voting on my behalf, please accept my apologies.  Thank you so much for trying to support me.  Well, I guess you actually did, and have for years while I did this thing.  I hope you felt the show was worth the expense anyway.  Please know that when I was on stage, I was performing for my hubby, my friends, for Coach, and just hoping the judges would see something they liked.  It was my 50-year-old-dance-recital.  LOL!