I haven’t blogged too much about this new program because I’ve been too tired.  I get home around 6:00 pm each night, eat, hang with hubby for an hour, and then go to bed.  Papers aren’t getting graded.  I haven’t been studying for my personal training exam.  Nothing. Sleep.  I need more sleep.

Two weeks ago, new measurements and a new concrete goal…

I must lose fat and keep muscle.  I changed the training program so that I’d be working more body parts each workout.  Shock the system and speed up the metabolism. I’m doing a 3-day split and work out 6 days in a row.  I lift in the mornings and do cardio in the afternoons.  On my heavy lifting days (Monday, Tuesday, Wednesday, Saturday), the lifting is done in supersets of two exercises, maybe three.  I will sometimes combine exercises for the same part (all chest) and then the next superset combines exercises for smaller muscles groups (biceps and rear delts).  I also started challenging myself to lift more – a lot more – on the exercises that are somewhat safe and controlled for my gimpy right shoulder.  Things like the seated cable row.  (I know I can do much heavier dumb bell chest presses if someone helps me get the damn dumb bells into position.)

On Thursdays and Fridays, I do giant sets of six exercises (two for each  part worked that day) and I do five rotations.  No rest between exercises except for transitioning to the next exercise. I only rest a minute or two between giant sets.  I time these longer rests.  Those giant sets are pretty brutal.  I still lift as heavy as I can manage for 8-10 reps, but I just can’t lift as much weight as I did earlier in the week.  If you do the math – I’m doing 30 sets in about 30-40 minutes.  The total time depends on the exercises I choose.  For example, if I do a two-handed tricep exercise, it goes faster than if I chose to work each arm separately.

I’ve done this for two weeks now.  To be on track for my overall goal, I have to lose 2 pounds of fat a week.  There didn’t seem to be much net change in weight the first week, so something else needed to be changed besides the lifting. (I promised myself I would stick with this program for one month and evaluate it after the next set of measurements.)  Instead, I changed the nutrition and the cardio.

I already wrote about the cardio.  Steady state, low intensity cardio seems to be a trigger for cortisol for my body.  I suspected it, but didn’t confirm it until last week.  So that’s off the table for now.  I’m only going to do high intensity intervals for a few weeks to see what happens.  However, I can’t do those everyday because it’s too hard on my body – that was confirmed by trial and error a couple months ago.  (Sure, I read about how it wasn’t supposed to be done everyday, but I tried it anyway because I’m stubborn.) So cardio will only happen two or three times a week now.

I’ve been told to cut carbs.  I’ve been told to increase carbs.  So you know what I decided to do?  Both.  Started carb cycling this week.  I kept the food the same, kept the grams of protein and fats the same everyday, but I adjusted the amounts of some foods so that the number of carb grams changed on different days of the week.  For this first week, I didn’t bring the carbs down as low as I’ve had them in the past.  I know people doing extremely low or even no carb days.  What I call a “low carb” day (140 grams), another bodybuilder would call a “high carb” day.  I’ve been consistently at that low carb level for weeks now and I think my body adapted.  My plan was to try cycling for a week or two and see how my body reacts.  If it kick starts the slow weight drop I want, I’ll keep doing it until I adapt again, and then I’ll reduce everything a little bit and start a new cycle.  It shouldn’t have been a surprise, but the best day was the first one – high carbs on Monday.  After weeks of low carbs, my body reacted very well to the extra fuel.  A very nice workout and a very nice calorie burn all day.

(1) I drink my “post-workout” protein/carb shake in the middle of my lifting session now, not at the end.  Totally goes against conventional wisdom, I know.  I’ve always questioned it, though.  Found one other trainer – a super famous one who has worked with one of my favorite bodybuilders – who has done it this way, too.  I want that good stuff in me when my blood is rushing to those muscles.  Period.  The last time I tried to cut fat following “conventional wisdom”, I gained fat and lost muscle.  DO IT DIFFERENT is my motto these days.  So I have a preworkout protein/carb shake and a mid workout protein/carb shake now.  I have my baggies of powders and just mix them with water.  Not a ton of calories or extra junk.  Just whey and maltodextrin.  (The next meal is real food and it happens about an hour later, so I think I’m covered.)

(2) You know that that gallon of water I’m supposed to be drinking every day?  I’m actually drinking it.  Hubby and I decided to buy the filtered water in big jugs and use our dispenser.  I go to “the well” every night before bed and fill tomorrow’s jug.  Carry it with me all day.

(week 1 – lost three and gained back a couple pounds;  week 2- dropped a couple more, maintained for three days, dropped another two at the end)

A Metabolism Change?  After I weighed myself this morning and put the number into the Bodybugg program, I read what it said about my results over the last two weeks. My average calorie deficit each day based on my food logs was468 calories, but when the daily deficit calculation was based on the change in body weight, it was 1275 calories.  ARE YOU KIDDING ME??  My body lost weight as if I was burning 1275 calories more each day than I ate??  And it did that when I was really only burning 468 calories more???  Isn’t that HAVING YOUR CAKE AND EATING IT TOO?   That freaks me out a little bit because I’m so afraid of losing muscle. WHAT did my body do with all those new carbs?  I hope she used them to make muscle.  If I’m maintaining my lean mass and losing fat, I’m thrilled.    (I love my Bodybugg.  I love numbers.) 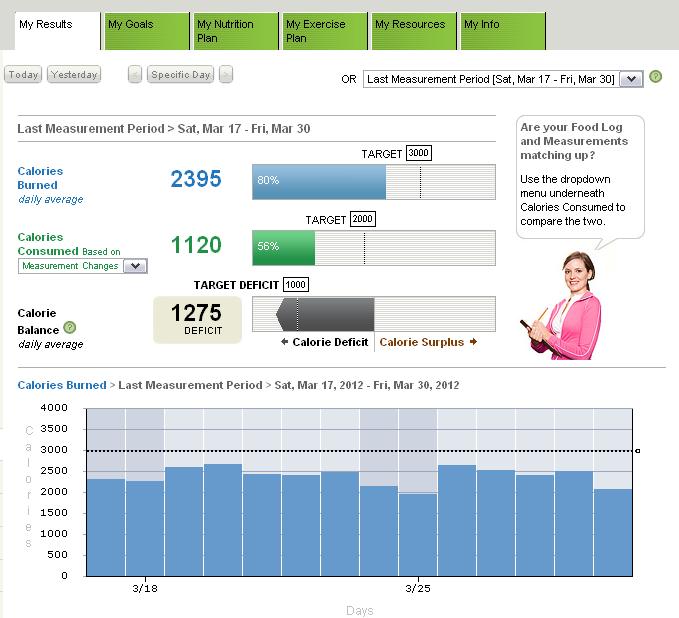 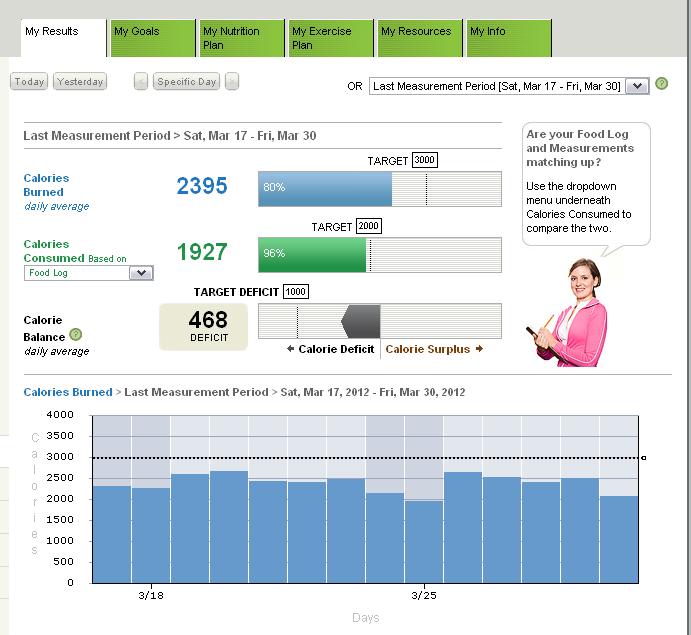 Even though it looks like this program is working, I’m very cautious. The mirror lies to me.  In the past, I have seen less fat and more muscle, and then the numbers come out the other way.  My scale is supposed to be able to check body fat, but it’s been very inaccurate since I dropped below 30%.  I won’t know for a fact that what I’m doing is working until I get my body fat checked again in two weeks.