I Compete With Myself 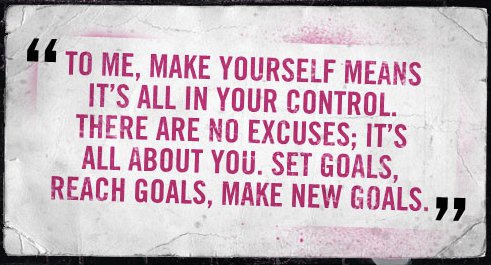 Not sure when it happened, but sometime in the last few days, I realized that I am my own competition.

What does that mean?

It is not useful to compare my progress to another woman’s progress. I cannot use that energy.  That’s a negative energy.  It’s a distraction that diminishes my focus.

What works for me is to set goals and achieve them and then set new ones.  My real competition is the person I was yesterday.  Of course I want to improve my muscular development.  I want my quads to have a sweep and that ‘teardrop’ shape just above the knee.  I want a defined line between my pecs on my upper chest.  I want larger deltoids.  When the judges ask for a front lat spread, I want them to see lats.  From the front.  (It seems to me that many female competitors do the ‘front lat spread’ motion, but the muscle is not there.)  I want traps that look like they were glued onto the top of my shoulders.  I want my good calf to get better and my retarded calf to catch up.  Triceps are developing nicely, but biceps are lagging.  And my holy grail…the abs.  I want a low enough body fat percentage that the awesome six-pack I’ve built under there isn’t under anything.

And my inner power-lifter wants to do sets of real pull ups, perfect my dead lift form so I can push that lift up over 200 pounds, bench my own body weight for reps, squat over 200 pounds with excellent form – and I want to pull a truck.  (Don’t ask.  OK, ask, but I’m not explaining that right now.)

To be better than I was yesterday, I have to improve my focus.  I need to learn to control my physical reaction to stress.  I’m beyond busy and need to find more efficient ways to get the chores done.  The mental side of bodybuilding is more important than most people on the outside know.

To be better than I was yesterday, I need to reduce stress about being ready for a particular contest.  I have to wrap my head around the idea that  I’ll be ready to compete when I’m ready.  There is nothing magical about August 2012.  If I miss it, so what?   This is hard for me to accept.  I feel like I’m accountable to meet the August 2012 deadline because I’ve said I would do it publically.  But if I make me my own competition – if I only concentrate on being bigger, better today than I was yesterday – then I have to let the calendar go.  I will be ready when I’m ready.  As Dawn put it, “You’re doing it.  It’s not as if you aren’t doing the work everyday.”  August 2012 is still my target.  I’m still going to compete with myself to hit it.  But I have to find a way to release the anxiety of the deadline because that’s working against my progress.  It’s not a real deadline.

Today when I watched the prejudging for the Natural Olympia bodybuilding competition, it became even more obvious that I am my own competition.  Some of the competitors on stage appeared to be equally developed, but their bodies were not identical.  No two bodies would be.  Each of them brought their best game on this day, but they looked different. 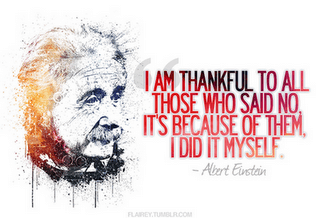 Wasn’t looking for it, but discovered this quote today.  Very applicable to what’s been going on in my life over the last few months.  I’ve had to find my own way.  I will become my own trainer.  Even if I could still afford training, I can’t give that control to someone else anymore.  It’s because of the ‘no’, (or in my case an “I’d rather not”) I’ve found new resources.  A 49-year old post-menopausal body can do many things a 30-year old body can do with respect to nerves, muscle and bone.  But the hormones make the chemistry different.  So when I say my competition is myself, I also mean that my challenge is trying to figure out how this body, right now at this age, works.  What does it need?  How much rest?  What’s going to coerce it into burning the fat that’s been stored for decades?  How do I lower that damn cortisol level so my new muscles won’t be catobolilzed?  Which supplements work and which are a waste of money?

I’m competitive by nature.  If I compete with myself, I should progress nicely.  I’m tough competition.