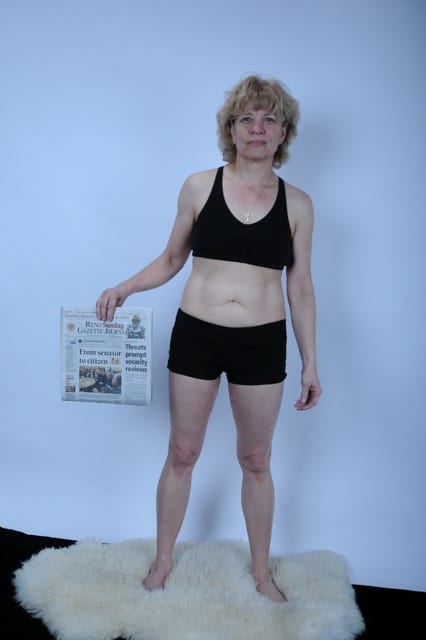 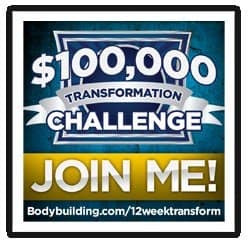 Last weekend I signed up for an online 12-week transformation contest. I had to send in a current picture to use as a “before”, which is the pic I uploaded here. It’s kind of strange to call this a “before” picture when I’ve been working on this transformation for 18 months now, but those are the rules of the contest. It’s not a great picture, but I’m proud of what I’ve accomplished so I like it. I think I can get my professional photographer husband to take some nice photos sometime.

Since I have a competitive nature, I told Trainer Adam that the prize is $100,000 and that he’d get a bonus if I won, thinking that he would get into the same mindset I’m in. I want to train like I have a shot at winning, but I don’t think I do. In my mind, it’s just a challenge to see what I can do in 12 weeks. I think the plan is to go through a mini-pre-contest-training-diet routine just to do it. Can’t hurt. It will be fun and an extra motivation to get the next layer of body fat off.
There is so much work to be done in the next year. I want as much mass and density as I can build. And my posture sucks. I don’t stand straight and my shoulders hunch forward. All of that can be fixed with training. Saw the doctor a few days ago about the nagging pain in my shoulder. She doesn’t think it’s serious and can be fixed with a few physical therapy sessions. So that will start soon, too. I’m sure it will be hard to do PT and train at the same time. There will be pain. Bring it. This is fun for me.
I’m learning a lot about how and when to feed my body so that the workouts are more effective. It’s really interesting. I feel like I’m a walking, talking biochem experiment. I have to learn about this stuff and be smart about it. In 3-weeks, I’ll be 49, I’m in full menopause, and I want to be a competitive natural bodybuilder. Got to be smart about this. Need the right combination of nutrients to make everything grow that supposed to grow and make the fat burn off. And I need to be careful not to get hurt and try to not get sick. I learned last week that mixing Monster Pump with NOS is not a good thing. And that a tiny bit of protein powder in my water bottle left in the car can get pretty nasty and should not be consumed. I think I gave myself food poisoning yesterday. At least I hope that’s what happened. I really don’t want to have a flu bug.
New goal – I want to be able to jump up to a bar and do regular pull-ups like the boys. Partly because I think it’s cool, but also because I want the V-shaped back I’ll get from doing it. And I personally think it’s an impressive thing for a woman to be able to do. Not something you see very often. When I can do that, I will really feel like a gym rock star. I don’t think Trainer Adam is happy about it, or even gets why I want to be able to do it, but he’s being a good sport. He said I will have to work on it every day. And since I can’t do them by myself, he has to push me up while I pull myself up. He says its no big deal but he was stretching more between my sets than I was the other day. He hasn’t dropped me yet or dropped anything on me, so it’s all good.
Let's connect! Follow me on social media:
Liked it? Share it!